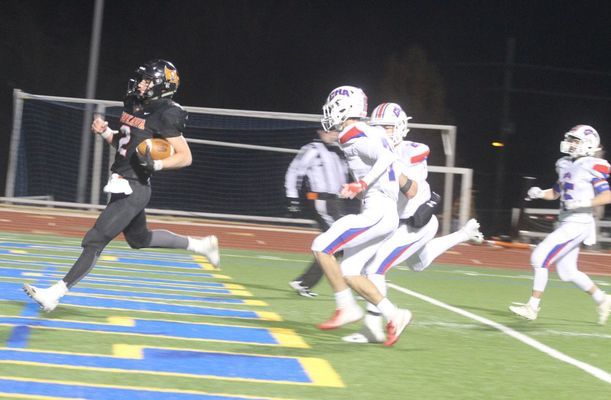 The Tonkawa Buccaneers are the Oklahoma State Class A 2018 football champions.

The Bucs defeated the Christian Heritage Academy Crusaders 21-6 last Thursday, December 6 in Stillwater to claim the title. The Bucs ended the season on a 13-game winning streak to finish the year at 14-1. It was the Bucs seventh state championship and first since 2009.

The support for both schools on a very cold and windy night was exceptional and one Stillwater official told the BJT it was more than they were expecting considering the weather and that the game had been moved up a night to avoid more bad weather that never came.

The Bucs Braydon Hampton scored the first touchdown of the game on a 52-yard run with five minutes left in the first quarter and with the PAT by Carson Robinson it was 7-0. CHA responded right away on a two-yard run by quarterback Zach Hale to make the score 7-6 after the first quarter.

The teams traded possessions in the second quarter, but the Bucs defense was able to keep the Crusaders out of the end zone and it was 7-6 at the half. The third quarter had CHA going into a brisk wind and effectively shut down their vaunted passing attack and with the cold weather there were also a lot of dropped passes. Hale who came into the game as one of the hotter quarterbacks in the playoffs was only 10-for-24 in the game for 72 yards. Hale also had three interceptions that would be pivotal in the later stages of the game.

With the score 7-6 going into the fourth quarter, the Bucs took over control of the game. The Bucs running attack was the dominant force. The Bucs got the ball with about ten minutes to go in the game. The run game eventually wore the Crusaders defense down and on several key fourth downs the Bucs went for the first down rather than punt into the wind. Those efforts paid off as Hampton broke loose for a 17-yard scoring play and then passed to Cameron Grein for the two-point conversion and the Bucs were out in front 15-6 with four minutes to go.

On the ensuing possession by the Crusaders, Simeon Shepherd picked off Hale and returned the interception for a 40-yard touchdown and the score was 21-6. The Bucs would then intercept Hale for the third time of the night with 1:21 left in the game. After a couple of timeouts by CHA it was the victory formation and let the celebration begin.

The Bucs ran 54 plays on the ground for 341 yards and had only seven yards in the passing game on two completed passes. CHA ran the ball 26 times for 134 yards and had 72 yards passing yardage. The Bucs had no turnovers while the Crusaders had a lost fumble to go with the three interceptions. The game was well played by both teams as there were only five penalties called for the entire game.