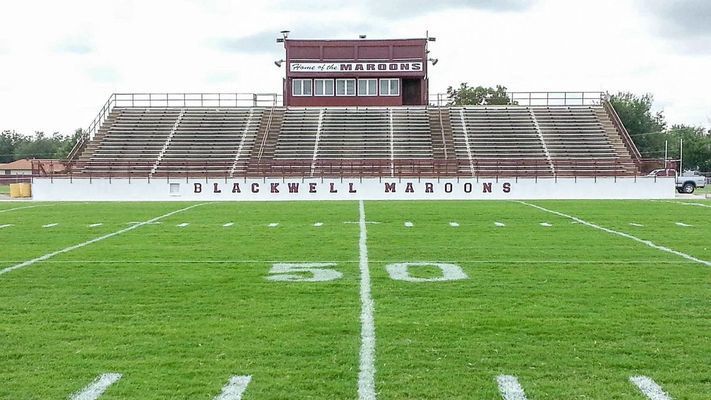 The Blackwell High School football season started over the weekend with a heartbreaking 36-34 loss to Kay County rival and defending Class A State Champion Tonkawa Buccaneers in Tonkawa on Aug. 30.

Senior Mikey Riley had the Maroons passing game at full throttle Friday night with a solid 18-for-31 effort for 306 yards, four touchdowns and no interceptions. The running game had four different guys carry the ball 21 times for another 99 yards. Trevor Goodenough led the way with 45 yards including a 19 yard scamper.

Riley spread the ball out to fiver receivers with Bret Lennon leading the way with seven catches for 119 yards and two scores. Kendall Burtner had six catches on the evening.

Lennon (two touchdowns), Burtner (one touchdown), Tanner Botts (one touchdown) and Worthy Shepherd accounted for the touchdowns. Burtner had two extra points and Lenon had one two-point conversion to close out the Maroons scoring on the evening.

The defense had four interceptions, three fumble recoveries and four sacks in the game. Shepherd had three of the interceptions. The Maroon offense did not help their cause as they gave the ball back to the Bucs on three fumbles as well. Matthew Davis led the defense with ten tackles.

“I am really proud of our effort. We played well enough to win, but we cannot turn the ball over in critical situations in the fourth quarter. The final two scores by Tonkawa were both off fumble recoveries,” said Maroons Head Coach Rick Lang.

Next up is the Battle of the Maroons in Blackwell’s home opener this Friday. The Perry Maroons (1-0) come to town after routing Fairview 39-8 last week in Perry. This will be the last time Perry’s talented senior quarterback Mason Drake will have an impact on the rivalry. Drake was 21-for-27 last week for 331 yards and four touchdowns. Perry’s running game was not as effective with only 37 yards on 27 carries in the game. Drake did utilize eight different receivers last week.

“Perry graduated a lot of kids last year. We must eliminate the big plays with their passing game and make them drive the field 75-yards and get pressure on Drake,” said Lang.