Sports: Wrestling heats up and season winds down 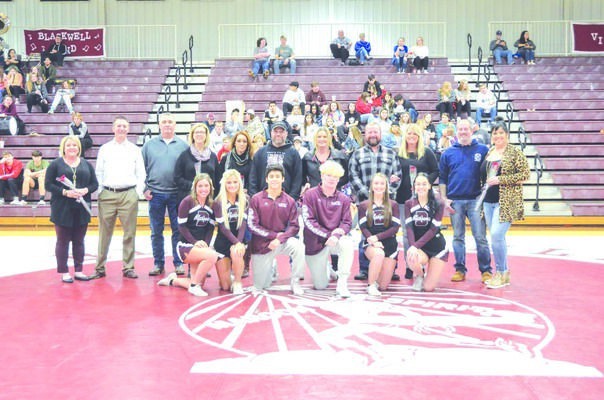 The Maroons had a tough day over in Ponca City last Saturday at the Big 4+4 Tournament finishing in last place out of the eight teams with 72 points in a tournament won by Class 6A Choctaw. The Maroons only entered seven wrestlers and lost one to medical forfeits after the first round.

Aiden O’Dell did provide a look into the future with a title at 106 pounds going 3-1 on the day. O’dell started his day with a 25-10 tech fall over Ernie Roper of Pawhuska in the first round. There were only six wrestlers entered so each wrestler wrestled two matches and then were put in a bracket format. O’Dell would drop a 10-3 decision to Caden Holman of Choctaw in his second match of the day. O’Dell would then win a 5-3 decision in the bracket semi-finals and come back and beat Holman for the title 3-0 later in the day.

Evin Simpson (120 pounds) and Christian Mora (160 pounds) would each take home a third place finish in their respective weight classes. Simpson would go 2-2 on the day in a field of five wrestlers that were then placed based on overall results. Simpson’s wins were by way of a fall in 3:16 and a 15-8 decision. The two losses were to the top two finishers, Gabe Valencia of Perry and Henry Warren of Stillwater.

Mora went 3-2 in one of the few full eight-man fields in the tournament. Mora would start his day with a 115-0 tech fall and follow that with a fall in 2:41 in the second round. Mora’s two losses came against Champion Chandler Holman of Choctaw and Tim Trigg of Deer Creek, both 6A schools. Mora would decision Josh Kime of Perry 10-6 for third place.

Mikey Riley had a rough day going 1-3 losing to three 6A wrestlers to end up in fourth place. Angel Rascon (113 pounds) and Logan Webb (220 pounds) also had a rough day with winless days. Tanner Botts was injured in a first round match and had to forfeit his remaining matches to go winless on the day.

The Maroons traveled to Kansas last Thursday and dropped a 51-27 decision to the Ark City squad to fall to 11-3 on the season in dual meets.

Botts (138 pounds) won a tight 9-8 match to get the team score to 21-12. The Maroons would forfeit 145 pounds and Kolby Looper (152 pounds) dropped an 8-4 decision and the team score was 21-21 with six matches to go. Mora would get the Maroons final points of the night at 160 pounds with a fall in 48-seconds to make the score 27-21. The Maroons would surrender three falls and two forfeits in the final five matches to make the final score 51-27.

The Blackwell Maroons wrestling team started their Homecoming Coronation dual meet with Newkirk on Jan.21 just like they did against Guthrie the week before in posting a 46-27 win.

The Maroons got falls at the first five weight classes to jump out to a 30-0 lead and Botts then scored a 6-5 decision over Dayton Cary for a 33-0 lead after six matches.

Riley score a major 10-0 decision at 182 pounds for the Maroons final four points of the evening and a 46-9 lead.

The Maroons surrendered a fall and two forfeits in the final three matches to account for the final score of 46-27.

The Maroons were scheduled at press time to travel to Cushing last night to conclude their dual meet season. The Maroons still have consecutive weekends of conference tournament, State Dual meet, regionals and state meet to wrap up the season.