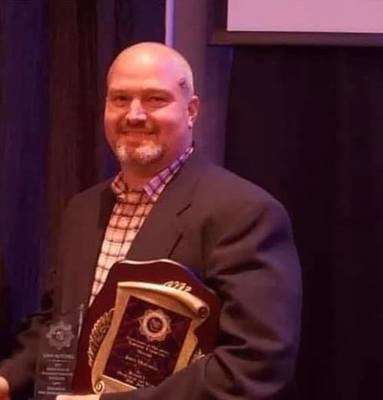 The preliminary hearing for Blackwell Police officer John Mitchell was still in progress at press time yesterday in the Noble County Courthouse in Perry. The courtroom of Judge Nikki Leach was filled to capacity with family, friends and fellow law enforcement officers from across the state of Oklahoma.

Mitchell is charged with murder in the second degree or in the alternative manslaughter in the first degree in the May 20,2019 shooting of Micheal Godsey in Blackwell. The charges were filed on November 29 by special prosecutor Jason Hicks from Stephens County after an indictment was returned by a multi-county grand jury.
Hicks called Tyler Kroger to the stand to start the hearing. Kroger was the first person that encountered Godsey in the early morning hours when she hit his 2017 Dodge Charger and then shot at his car disabling it before leaving the scene. Kroger related his interaction with police officers as well stating that he talked with Blackwell Police, Kay County Sheriff’s officer and the OSBI.

The prosecution then called Sergeant Cory Ingram of the Blackwell Police Department to the stand. Ingram is the evidence officer and testified how he took the videos from Mitchell’s vehicle and Keith Denton’s vehicle and put them on a thumb drive on the computer for evidence purposes. Ingram was on the stand for 12-minutes, but since he is also a defense witness, he could not leave the courthouse. All witnesses are under a sequestration order from Leach and can not be in the courtroom for any of the testimony.

Hicks then introduced the video of the shooting and showed it to the court. Denton’s video was over 30-minutes long and the court heard and saw all of his interactions with Godsey. Mitchell’s video was also shown and it was about 20 minutes long leading up to the shooting when it was stopped.

Blackwell Police Officer Keith Denton was still on the stand at press time. Denton was the first police officer on the scene at the Kroger shooting and found Godsey after other reports of shots fired and had interactions and an exchange of gunfire before Godsey fled the scene.

The court had two days set aside for testimony in Perry. District Judge Nick Leach is presiding over the hearing and court records indicate over 20 witnesses have been subpoenaed to give testimony in the case.

We will pass along all updates as they become available at www.blackwelljournaltribune.net.