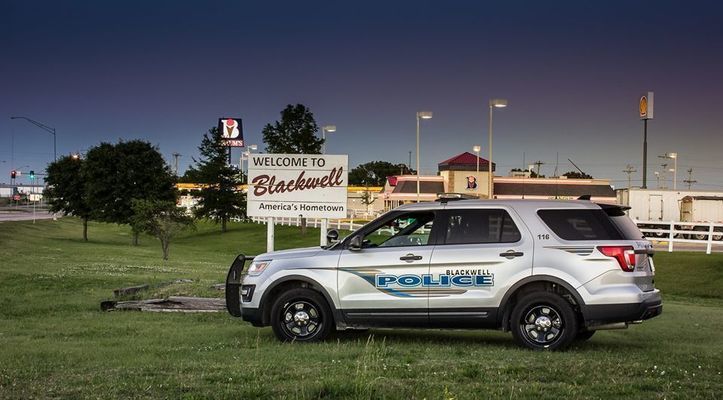 “On behalf of the men and women of the Blackwell Police Department, I am honored to present our 2019 annual report,” Wood said. “I am privileged to work with these great men and women who serve the City of Blackwell, and we are very blessed to be part of this great community. I am very proud of the members of the Blackwell Police Department and the reputation they have earned for contributing to the quality of life our community enjoys.

“I would first like to say ‘Thank you’ to City Manager Janet Smith for her continued and unwavering support she has demonstrated to our police department over the past year. I would also like to thank Mayor Greenfield and the rest of the City Council for their support of our staff. It helps having engaged leaders who appreciate the hard work from the men and women of our department.

“I want to say ‘Thank you’ to my staff. The men and women who represent our department are true professionals dedicated to serving the noble cause of policing and emergency service. They are willing to run towards danger while others run away. They risk their lives for people they have never met and may never know. Their schedules require they work weekends, holidays, and overnight when most of our community is sleeping. They are true service-minded individuals committed to the welfare and safety of this community.”

Wood concluded his opening remarks by saying: “To our community, our success is only possible with the support of you, our residents, businesses, and elected officials. The trust that our community has in our agency generates an enormous responsibility. When used properly, it results in a partnership that benefits us all, and I thank you for that.”

2019 highlights for the department include the February capture of Luis Frias, who was wanted and tried for the 2013 murder of Janett Reyna, a former Blackwell police officer.

The Blackwell Fraternal Order of Police was recognized as the Chamber of Commerce's Business of the Month in March. Wood recognized Lt. John Mitchell, who received two awards from the Oklahoma Association of Narcotics Enforcers in May. He also recognized Officer Kayla Green for graduating the Oklahoma Council on Law Enforcement Education and Training Basic Police Academy.

Reports of runaways were down by almost half, with only nine in 2019. A decrease in stolen vehicle charges was reported, with only seven such charges in 2019. Vandalism complaints were down to 33 in 2019, compared to 56 in 2018.

For animal control statistics, dog and cat impounds were up from 2018 on both accounts. Dog bites were up from 17 in 2018 to 27 in 2019. Last year, the Blackwell Animal Control Department adopted out more than 400 animals and sent more than 242 to non-profit organizations.