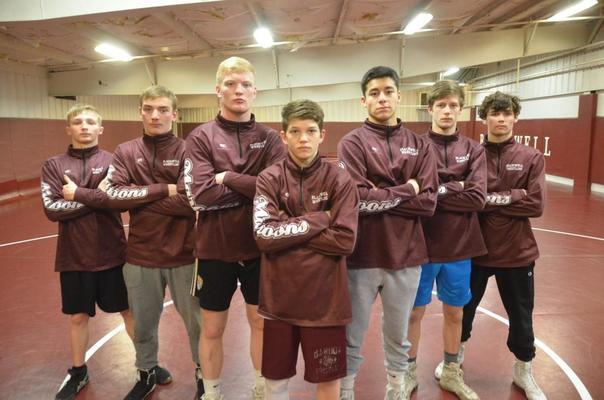 The Blackwell Maroons wrestling team traveled out to Geary last weekend for the Class 3A regional tournament. The Maroons will send seven guys to the state tournament this weekend in Oklahoma City. The Maroons finished in fourth place with 163 points behind Comanche (273), Marlow (231) and Bridge Creek (193).

Aiden O’Dell went 3-0 with three falls to win the regional title. The sophomore took 13 minutes to win his three matches. The sophomore is 28-6 heading for Oklahoma City and will await the winner of the Friday morning wrestle-off between the fourth and fifth placers.

Mora had to go 4-0 to claim his regional title with two falls and two decisions, beating Kaden Van Buskirk of Comanche in the finals 5-3. Mora will also wait for the winner of the wrestle-off for his first round opponent.

Riley went 3-1 on the weekend with two falls and a decision before getting pinned by top seeded Landon Holt (37-3) in 33-seconds in the finals. Riley beat second seeded Kyle Wilson of Marlow in the semi-finals 3-2 to advance to the finals. Riley will face Dillon Murchinson (25-11) from Vian in the opening round.

Caleb O’Dell (27-10) went 3-1 on the weekend with two falls and a 14-12 decision over Laycin Grider of Bridge Creek In the semi-finals. Lake Epperson of Comanche pinned O’Dell in 54-seconds to claim the title. O’Dell will face Gavin Montgomery (36-8) out of Sallisaw in the first round.

Ailey went 1-1 to start losing to Kaden Smith (46-6) of Bridge Creek in the semi-finals on a fall at the three-minute mark. Ailey bounced back with a19-4 tech fall and a 13-7 decision over Wyatt Meredith of Berryhill for the third place spot in the regionals. Ailey will get Corbin McCarty (17-4) of Sallisaw in the first round with the winner probably getting Smith in the semi-finals.

Lara (17-90 made it to the semi-finals before getting pinned by regional champion Kyle Davis (44-4) of Marlow. Lara bounced back in the consolation semi-finals with a fall in2:19 before falling to Chase Massie of Chandler in the third place match. Lara will have to go through the wrestle-off Friday morning against a Sallisaw wrestler to get into the first round bracket. If he wins, he will draw Logan Smith of Perry in the first round.

Simpson who had a #1 seed going into the regional was upset in the second round on a fall by Rowdy Story of Bethel. Simpson then won two consolation matches before losing to Tucker Oliver of Comanche in the consolation semi-finals. Simpson then pinned Story in a rematch in 1:02 to earn the trip to Oklahoma City. Simpson will also draw a Sallisaw opponent in the wrestle-off round with the winner advancing against #1 seed out of the west Hunter waits of Berryhill.