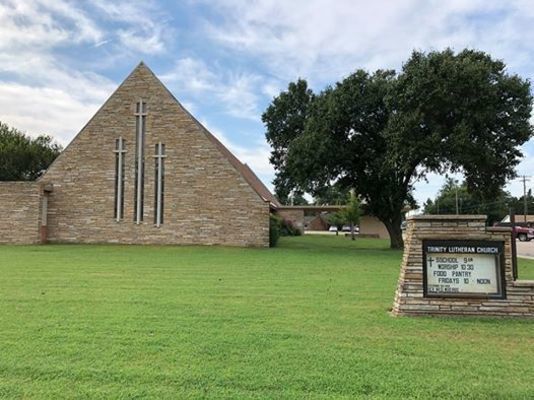 The festival will begin at 3:30 p.m. A catered dinner, which requires the RSVP, is scheduled for 5 p.m.

This event aims to celebrate the church's 95 years in Blackwell, beginning with its first organization in March 1925. Services were held as early as 1903.

The first Lutheran services were held in the homes of local Lutheran families and were conducted at intervals by pastors from neighboring congregations, as well as professors from St. John's College in Winfield, KS.

Soon after, a Sunday school was organized, and an adult Bible class was conducted. In the fall of 1924, Reverend A.C. Dubberstein, the Lutheran Secretary of Missions in Oklahoma, encouraged the small group to organize and form a full congregation.

In January 1925, the American Legion Hall was engaged for Sunday school and worship services. The first service there was conducted by Reverend W. Koch, pastor of St. John's Lutheran Church, located east of Blackwell.

On February 15, 1926, the aforementioned group called its first resident pastor, Reverend Carl Matthies of the Ebenezer Lutheran Church in Cherokee. He was installed in August 1926, with Koch performing the Rite of Installation.

On April 5, 1926, the Trinity Lutheran congregation instructed its officers to purchase lots for the construction of a church building. Just five days later, three lots were purchased at the corner of East McKinley and D Street. In the same year, on December 3, it was resolved that a church building would be built at a cost of $13,000.

The building committee was composed of Frank Priboth, Albert Turk, and Simmering. The contractor was Charles Bersche. Plans were drawn by architect Robert D. Bersche. Ground was broken for a new church May 3, 1927, and the cornerstone was set July 17 of the same year. The building was dedicated Nov. 13, 1927. On Aug. 19, 1928, a new home was completed to serve as a parsonage.

Meanwhile, the young congregation decided to affiliate with the Oklahoma district of the Lutheran Church - Missouri Synod, with which it was in full doctrinal agreement. This action took place May 1, 1926.

For a short period of time, the congregation received financial subsidy from the Oklahoma district of the church body. But in 1931, it became entirely self-supporting. On its 10th anniversary in March 1935, the congregation had 200 baptized members. In May 1953, church attendance had increased to the point where two morning services were necessary to accommodate the congregation.

The following April, the church embarked on a 150-week pledge program for a building expansion project. A building committee was elected. In November 1954, over $70,000 was pledged for the program.

On May 22, 1955, the congregation was unaware that it was conducting its last service at McKinley and D St.: The following Wednesday, a devastating tornado leveled the church, parish house, and parsonage, along with a large part of the city.

The next Sunday, Sunday school and worship services were held as scheduled, but they took place at Lovett Junior High School. It served as a temporary house of worship until a new church could be built.

In June 1955, Trinity Lutheran Church voted to locate its new church building at the corner of Vinnedge Ave. and First St. A new parsonage was purchased at 220 Russell Ave.

Ground was broken for the new church March 11, 1956. Cornerstone setting services were held September 23, and the church was dedicated December 6, 1956.