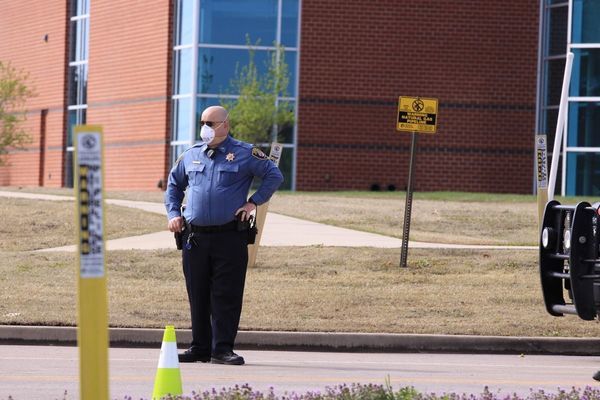 Law enforcement officers in Oklahoma have long worked to keep burglars and thieves off the streets. But now, they’ve got a new class of criminals to fight: germs.

Across the Sooner State, law enforcement officials are rethinking the way they interact with the public as the coronavirus spreads. They’re disinfecting police equipment and vehicles with anti-bacterial wipes, keeping distance between themselves and members of the general public, and washing their hands more frequently.

In Oklahoma City, officers are taking police reports for low-level crimes over the phone instead of taking them in-person.

“Every situation is different,” Oklahoma City Police Department Sergeant Gary Knight said. “If somebody calls us because they’re in a car crash, that’s different than somebody calling because they want to give us information on someone who is having a domestic, or somebody who just had a burglary occur. All of those things are different situations.”

To help keep officers safe, police dispatchers are asking callers whether they are sick or have tested positive for COVID-19, the disease caused by the coronavirus, before officers respond. That information is then relayed to officers.

“We’re still going to respond to calls and do things the way we’ve always done, as far as enforcing laws, but we’re just mindful of what’s going on out there,” Knight said. “We are here 24/7 for the public just like always.”

Troopers with the Oklahoma Highway Patrol are taking a hands-off approach to traffic stops. Rather than handling drivers’ licenses themselves, troopers will ask violators to read off the information on their licenses. They hope this measure will reduce the risk of person-to-person spread of the virus.

“We’re recommending that, if a trooper makes a traffic stop, instead of handling a driver’s license, that they’re requesting the violator read off the license information,” Captain Paul Timmons said. “They have been advised to frequently wash their hands, use hand sanitizer, things like that.”

Timmons said troopers will wear gloves when necessary and use discretion when interacting with the public. But they won’t stop working.

Deputies at the Oklahoma County Sheriff’s Office are washing their hands, cleaning equipment, and distancing themselves from other people – including children.

“We’re preaching social distancing whenever our deputies are out, even when kids want to shake their hands,” Mark Myers, a spokesperson for the sheriff’s office, told The Oklahoman. “Maybe just do a salute or a phantom high-five or an air fist-bump. It sounds funny, but these are the times we’re in right now.”

Deputies are maintaining a distance of at least six feet from people they come in contact with. When making traffic stops, deputies will speak to drivers through the passenger-side window of the driver’s car.

“We still have a job to do as law enforcement,” Myers said. “Obviously, if we see something violent happening or respond to a call of violence, we will intercede and do our jobs.”

Inmate visitation is still available at the Oklahoma County Jail thanks to the department’s video kiosks.

“In our lobby, there are kiosks, where people who don’t have access to the internet or don’t have access to a laptop computer can schedule a time to come in and use those kiosks,” Myers said. “We haven’t shut down the lobby, per say, because of that specific function.”

Larger metropolitan departments aren’t the only agencies working to protect their officers from the virus. The Blackwell Police Department has cancelled inmate visitation at the municipal jail and closed its lobby to the public.

Blackwell Chief of Police Dewayne Wood said it’s the first time the door to the department’s main lobby has been locked in his more than two decades of service.

“When we tried to shut our lobby down, that door in my 22 years has never been locked,” Wood said. “In fact, when they tried to lock it, they couldn’t get it locked because the lock had never been turned, and it was seized. I would say that’s a drastic measure, when a police department says to the general public, ‘Instead of coming in, call us on the phone and tell us what you need.’ I think that’s probably the most drastic change I’ve ever seen in my career.”

“The bottom line is, we still have wives, kids, significant others, and families at home,” he said. “It puts a lot on the officer to remember that we are all responsible for ourselves.”

Inside The City of Blackwell's Small Business Loan

Oklahoma to begin "Bounce Back Plan" from COVID...