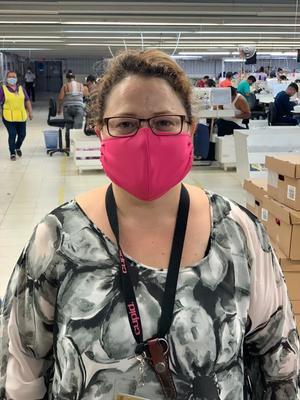 One Blackwell business is helping to fight the coronavirus pandemic from its own assembly line: Southwest Cupid.

The apparel giant entered the fight against the coronavirus in much the same way the company was born: fighting World War II from home.

“It was brought to our attention late last week, when concerns started coming in about how hard people were going to be effected,” Ken Langston, senior vice president of operations, said. “So we immediately began to do research, looking for the right fabric, material, designs, all of that so that we could make masks. Then at our manufacturing center in Nicaragua, we made more than 6,000.”

The masks were then brought back to the United States, where they were donated to Blackwell and Ponca City healthcare facilities. Some were also sent to sites near Cupid's Pennsylvania location.

“We're working as quickly as we can. I know everyone is,” Langston said. “We're in the process of making gowns and more medical apparel as well, and planning to donate those within Kay County already. This is what we need to do first and foremost as a company and family. It is what people are expecting of us.”

Cupid began in the early 1940s in New York City following the outbreak of World War II, which led to a shortage of supplies and material. The company opened its production facility in Blackwell in 1977.

Cupid Intimates is globally recognized as a manufacturer of women’s shape-wear and has made contributions to a number of Blackwell causes, including Blackwell High School and Blackwell Middle School athletics, cheerleading, the Special Olympics, and youth bowling. The company has also donated to: Leadership Blackwell, the Elks Lodge, Kay County Boy Scouts, United Way, the Shriner's Club, Christmas for Kids, Kay County 4H, and BHS Music boosters.

Cupid is responsible for the Blackwell Public School Foundation’s “Bell Ringer” endowment fund, which has helped fund school expenses and the “Outstanding Teacher” grants since the late 1980s.

Since 2004, Cupid has also awarded to scholarships annually to BHS seniors.