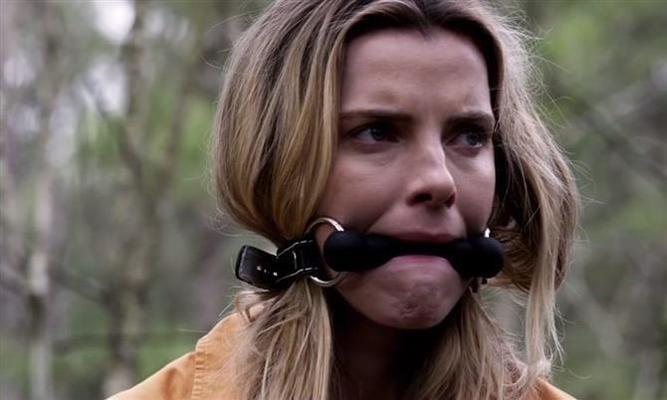 Universal Studios' THE HUNT cause a stir in late 2019 when the trailer was released following several mass-shootings across the country, causing the film to be attacked across the spectrum of right and leftwing news sources for it's depiction of political violence. The film was pulled from it's September release and moved to March, where it faced an even greater hurdle: the shuttering of movie theaters worldwide in the face of the COVID-19 pandemic, which is why it has released early on digital.

THE HUNT finds several unwitting individuals- rightwing conservative Americans referred to as “deplorables”- kidnapped, drugged, and dumped into a game of life and death at the hands of uppity liberal elites who plan on hunting them for sport.

Directed by Craig Zobel (Z for Zachariah) and written by the duo of Nick Cuse (HBO's Watchmen; The Leftovers) and Damon Lindelof (PROMETHEUS; LOST; STAR TREK) the film plays into our real-world political tension between the Donald Trump “deplorables” and the social crusading, snobbish, liberals that despise them.

THE HUNT gives a shockingly sympathetic spotlight to the hunted, lead by Betty Gilpin (Netflix's GLOW; Showtime's Masters of Sex) and a rather hilarious takedown of today's cool, cultured, liberals spearheaded by businesswoman Athena (Hillary Swank) and makes for a hilarious B-movie thriller that ends with one of the most well-choreographed hand-to-hand action sequences I've seen in a long time.

This pulpy, schlocky, nature of THE HUNT comes from the film's willingness to poke fun at both sides of our nation's politics without soap-boxing for either. The Hunted, a majority of which are killed off in rather fast, surprisingly, giddily graphic manners, spout lines about “stand your ground” laws and mumble comments about “Globalist cucks” while some comment that guns don't just “go off” and it takes a smart, responsible, mind to handle them. The Hunters, the liberal elite, get into pissing contests about who is the most cultured while tripping over themselves to simultaneously not offend their friends and, also, speak their mind.

It's all really funny and inoffensive, while making the audience see the ridiculousness of the whole endeavor. I saw a review compare THE HUNT's politics to other pulpy action features like THE CONDEMNED (an apt comparison) and even WILD WILD WEST which takes it's racial themes (Will Smith's James West battling a Confederate War-criminal R. Less Loveless) at face value with the purpose being to entertain and amuse rather than to make a thesis-level statement unlike, say, the heavy-handed and groan inducing politics of last year's THE FIRST PURGE, which traded the franchises' grindhouse exploitation violence for grand-standing.

The irony of the film reaches a climax when it's revealed the entire reason behind “The Hunt” was a leaked text-thread between businesswoman Athena and her liberal pals where she jokingly suggests they kidnap a bunch of “deplorables” and kill them at her manor, leading the news media to break the story as “Manorgate”. The online conservatives consisting of a big game hunter, war vet, and conspiracy theorist with a podcast among others, take this literally and cause Athena and her friends to lose their jobs because of it, leading to kidnapping and eventual murder which begs the question on which “side” is really the most humane.

Our star, Getty Gilpin's Crystal, absolutely makes the film. She's not a typical “action broad”, and we get a solid explanation of how and why she can kick ass so astutely. She's a war vet, and just wants to go home. Simple as that. THE HUNT harkens back to a time when movies could simply be made to entertain, and that's all this is, entertainment. At a time like this, where you wish the most dangerous thing in the world was online arguments between liberals and conservatives, it's what we all need.