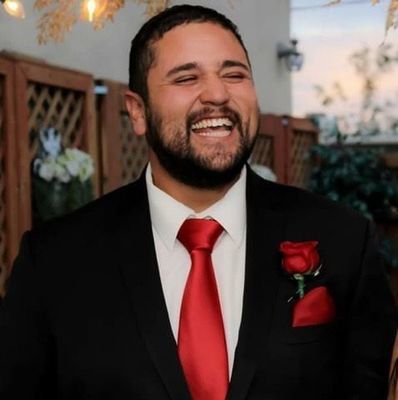 Alvin Omar Rascon was born on Saturday, June 6, 1987 in Blackwell, Oklahoma, to a life of music, fun, and family.

The son of Alvaro and Patricia (Calleja) Rascon. Alvin grew up attending Blackwell Public Schools where he graduated from in 2005. After high school Alvin studied at Northern Oklahoma College before transferring to Oklahoma State University.

Alvin was always willing to lend a helping hand whether it be at The Youth Center, helping with yard work or loading something up in his truck. He was the one you could count on. Alvin also spent many summers working as a lifeguard and camp counselor at OLOG, Our Lady of Guadalupe Catholic Church Camp. Camp was his happy place. Along with serving others Alvin took great joy in music. His collection of vinyls is one to be envied. He took great joy in cooking for his family, ìSteak Nightî and ìBrinnerî (breakfast for dinner) were staples in his household. He loved golf, discgolf, and playing guitar. He watched Oklahoma State football religiously, and made it a point to attend at least one game a year. Alvin loved his friends- like family. They were his family. Alvin enjoyed fireworks, bonfires, late nights shooting pool, listening to music having deep conversations often while drinking his fine whiskey and smoking a cigar. A man of very sophisticated taste.

On May 5, 2014, Alvin and Katie Beth Hill joined in marriage and settled in Ponca City. Together they have two precious girls; Ava Rose and Zoey Alyson. He was a patient daddy and loved his girls more than they will ever know. Everything he did, he did for them.

There will be a private viewing for family, Wednesday, April 29th at Grace Memorial Chapel. At this time we are planning to have a memorial for Alvin on June 6th, 2020. More details to come later. Donations may be made in Alvin's memory to his daughters at Community National & Trust in Ponca City, and flowers may also be sent to Grace Memorial Chapel.

Words of encouragement and messages of condolence may be left online at www.gracememorialchapel.net. Cremation arrangements are under the direction of Grace Memorial Chapel.