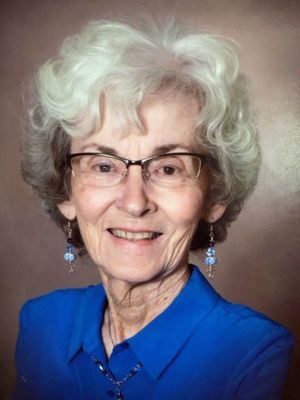 Dorothy Nell Claybaker was born on September 14, 1932, in Blackwell to Ray and Ella (Gilbert) Miller. She grew up in Blackwell with her brothers Don and Lloyd and was a member of the First United Methodist Church. There she was involved with the Methodist Youth Fellowship and played the piano for many of the Sunday evening services. While in junior high school, Dorothy was already quite an accomplished pianist and also played on the girls’ homeroom basketball team. Later at Blackwell High School she was a member of the Pep Cats, Vice President of her sophomore class, and a three year member of the National Honor Society. She met Max Claybaker as a freshman when he moved from the Star School District into Blackwell Public Schools. They became friends and were involved in many of the same school organizations and activities, many of which involved music. She was the librarian for the Blackwell High School band and accompanied Max on many of his competitive trombone solos.

Dorothy was graduated from Blackwell High School with the class of 1950 and went on to attend Oklahoma A & M College in Stillwater for one year. After her freshman year, Dorothy and Max were married on August 31, 1951, at Trinity Lutheran Church in Blackwell. Following their wedding they returned to A & M where Dorothy was employed as the secretary for the Dean of Education while Max finished his degree.

Dorothy spent her life on the farm with Max doing what she loved more than life itself … taking care of her family. She was in the kitchen almost around the clock in the summertime preparing the next meal for her family, with many of those meals being taken out to the field where Max and the boys were working. She was a wonderful wife and mother. Her husband and her children were her life.

Dorothy was preceded in death by her parents; her son, Neal; her daughter, Janet; two brothers, Don and Lloyd; and a sister-in-law, Doris.

A private family graveside service is being held with a public memorial service to be planned at a later date.

A memorial has been established in Dorothy’s honor to Stillwater Medical at Blackwell in c/o Roberts and Son Funeral Home, 120 W. Padon, Blackwell, Oklahoma 74631.