Legends in Oklahoma: Bigfoot, A giant octopus in our lakes, and Little People. 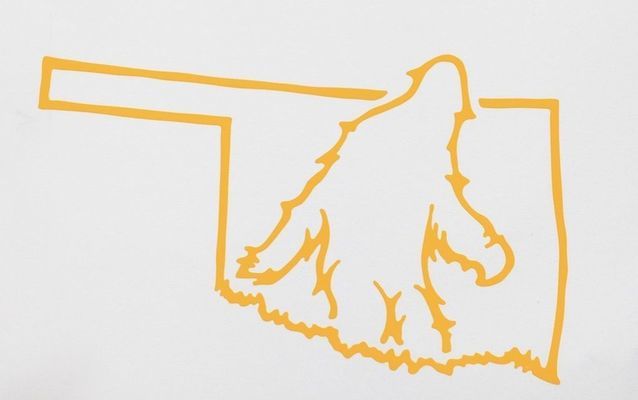 “But what kind of spooky stuff do we have in Oklahoma, besides the shirtless, hairy, beasts that roam Walmart with jagged teeth and overabundant ass-crack hair spouting from their unwashed basketball shorts?”

Starting off in Blackwell and Kay County, I grew up hearing my tale or two about the Halipeter Bridge, which has it's sinister origins changing depending on who you ask about the Halipeter House. People were hung, they jumped, they got killed, they drowned...the result is usually the same: turn off your car on the bridge, and wait. Ponca City, famously, is known for the haunting of the 101 Rodeo Grounds and the Marland Mansion (of course).

Did you know Oklahoma supposedly has a handful of freshwater octopus sightings in lakes such as Thunderbird, Oolagah, and Lake Tenkiller? According to many eye-witness reports the creature is as big as a Jeep with copper skin, and can be attributed to the abnormally large amount of drowning-related deaths that occur in the state.

Yes. The octopi killed those men...not the copious amounts of beer they drank before going swimming at night.

Did you know that Oklahoma has a three-day Bigfoot festival? The Honobia Bigfoot Festival & Conference is featured on the TravelOK tourism website, and features guest speakers, camping, fun games, live music, hand crafted arts, and more.

Southeastern Oklahoma is a hotbed for Bigfoot activity, and chances are you know a guy, who knows a guy, that's seen a guy, who's seen a Bigfoot.

Our most famous Bigfoot originated near Talihina, and goes by the name of the “Green Hill Monster”

Down near Spencer, the story of The Purple Church sends a chill down many a spine, and a twinkle in the eye of any paranormal hunter. Located on private property, permission is required to visit...but should you gain access, you might wish you hadn't.

Nestled in the dead woods, there are the remains of a structure that is said to be regularly populated with bones- both animal and human- where Satanic rituals have taken place. There is a cellar, said to fill anyone who enters it with fright and dread. Figures in robes have been spotted around the premise, and if you linger for too long you might feel breathing down your neck, or scratches down your back,

Of course, being a land belonging to Native Americans, Oklahoma's more terrifying-horrors rely in the form of “Little People”, mischievous, dwarf-like beings that change from tribe to tribe. Some are benevolent, helping hunters and farmers. some are more sinister, luring children away never to be seen again.

The “Deer Woman” is found throughout many tribes as well, and is a more kind being that seeks only to murder date-rapists.

Used as a cautionary tale, the Deer Woman will attempt to seduce you at a gathering or party, until you want to take her away If you don't recognize her cloven hooves she will let you lure her away and, now knowing your sexual intentions of taking advantage of a drunk, hot, Native woman she will stomp you to death. Not in the good way.