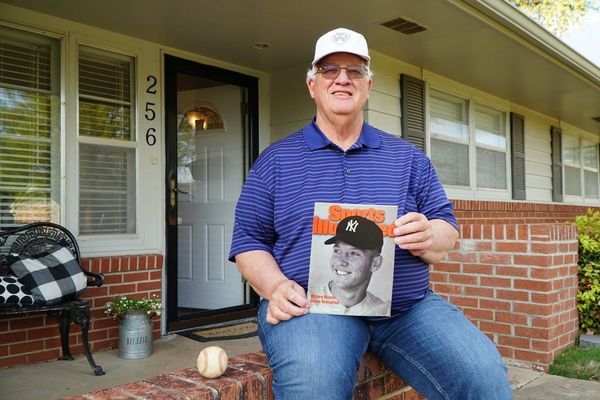 It was a hot day – August 26, 1961. He and his father were in Kansas City to watch a baseball game. The New York Yankees were playing against the Kansas City Athletics.

The two arrived at Municipal Stadium. But they were the only people there. Corbin's dad thought the game started at 1 p.m. He was wrong. It started at 4 p.m.

“I was peeved at my dad,” Corbin said. “I couldn’t believe he messed up on the tickets.”

A bus pulled up.

It was the Yankees.

Corbin stood in the doorway as the team members filed into the stadium. He wouldn’t move an inch. The players had to push him out of the way. He was starstruck.

Then, Mickey Mantle walked out.

“I wouldn’t move from the door,” Corbin said. “When Mantle came out, even my dad couldn’t speak. He was God.”

They were shocked – so shocked they didn't know what to do next. But the time came. They had to act.

“Finally, Mantle’s got his hand on the door-handle going in, and Dad yells out, ‘We’re from Oklahoma!’”

Mantle stopped. He sat down and talked with the pair. And Corbin will never forget his moment among the stars.

Mantle is widely regarded as one of the best baseball players in history. He’s a member of the Baseball Hall of Fame, and he’s a 20-time All-Star Player. Those are just a few of his most significant achievements. Though he's gone, his legend lives on the hearts of baseball enthusiasts everywhere – especially those in Oklahoma.

Mantle was from Commerce, Oklahoma. And he never forgot that. Oklahomans like Corbin traveled long distances to cheer him on.

As sporting events across the nation are cancelled to stop the spread of the coronavirus, Mantle's fans are taking time to reflect on the impact the legendary player had on them.

Blackwell Fire Chief Cory Hanebrink loved “The Mick.” And he came heartbreakingly close to meeting him.

In May 1995, Hanebrink's father came home with the news that Mantle wanted to meet Hanebrink. He was enthralled. Mantle told Hanebrink's father to bring the young baseball fan to the consistory next year. Then, they'd all go out to lunch together – and Mantle would give Hanebrink, then 16, a signed baseball card.

But that meeting never happened. Mantle died in August at the age of 63.

“So close, but yet so far away,” Hanebrink said.

Though Mantle died before Hanebrink could meet him, his memory will live on forever with Hanebrink. He still remembers how he felt when he first learned he'd get to meet his hero.

“I was like a kid in a candy store,” he said. “I was so excited I was going to get to meet the legend.”

Hanebrink isn't sure what he would have said had he ever met Mantle. Then again, does anyone know what to say when they meet a legend?

“It's kind of like meeting God. You don't know what you're going to say,” Hanebrink said. “Not to compare him to God, but … being 16, I don't know what I could have said.

“I idolized him because he was such a great man, not in just the sport, but as a Godly man and as a righteous guy.”

Yes, Hanebrink did revere the Mick, just as so many other people did. Mantle knew that.

So, about that would-be signed baseball card. …

“His one stipulation on this card was that I would never sell it, because he knew it would be worth a lot of money,” Hanebrink said. “He could have sold it and made money. But that was his only one stipulation that he had, that I wouldn't be able to sell the card, which … I would have never done that. It'd mean way much more than the dollar value.”

Mantle meant different things to different people. To some, he was an idol. Others saw him as a warrior.

Jack McClure grew up in Asher, Oklahoma, where he played baseball in high school. He's on The Oklahoman newspaper's infamous All-Century Baseball Team – the first one. He's the designated hitter.

And anyone who knows anything about baseball in the Sooner State knows about Asher's high school baseball team: It's won 46 state championships.

That paved the way for McClure to sign on with the Astros straight out of high school in 1964. He played in the minor leagues. In 1965, the Astros started their spring training in Ft. Lauderdale, Florida. They played an exhibition game against the Yankees.

McClure didn't play that day. Mantle didn't play either. He was injured, and in his career, he was no stranger to pain.

But McClure saw Mantle once more. This time, at the Astrodome.

McClure and some of his teammates from Oklahoma had an idea.

“After we took our batting practice – we were all from Oklahoma – we said, 'Let's go down and introduce ourselves to The Mick and watch him take batting practice,'” McClure said.

That day, Mantle was hurting. Bad. One of his teammates, Hector Lopez, told McClure that Mantle was covered with tape and gauze.

“He said, 'I don't even know how the guy can get out there,'” McClure said.

But Mantle was hitting baseballs up into the purple seats at the Astrodome, and “nobody hits them up there,” McClure said. “First time up, Mick hit one up over the 425-foot sign in the Dome. We talked to him after he got through with batting practice, and he was just a country boy like us from Commerce, Oklahoma, small town. And he was nice to us. That was the last time I saw him right there.

“But he was my idol growing up, I can tell you that, and a bunch of other kids' growing up.”

McClure remembers The Mick as a fearless player who inspired millions of young Americans. But at heart, Mantle was always one thing: A brave Okie.

“He was a warrior, that was for sure,” McClure said. “And meeting him, I was scared to death to even walk up there at 18 years old and even talk to Mickey Mantle. But he was nice to me, and he knew where Asher was. … When Mickey started talking, I found that he talked just like I did.”