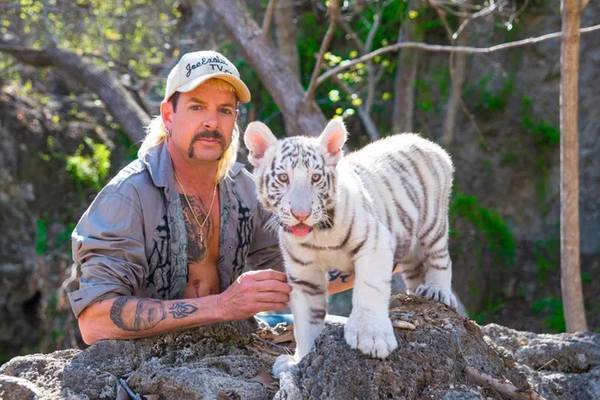 The Tiger King phenomenon brought the world together during the COVID-19 pandemic, and you might remember my column on it stating that we should embrace Joe Exotic and the inherent weirdness of Oklahoma that he personified...well, I'm happy to report a few things.

One, I got my first fan-mail about my column! One happy reader sent this charming message to my inbox:

“To say we should embrace this man is a disgrace. Do you even realize what acts of violence he used towards the animals? Not to mention hiring someone to kill a human being! Who the [expletive] cares about his 'style'. WRONG is WRONG.”

First of all, I clearly stated that Joe Exotic wasn't a good person in my column. I do NOT and never would support violence against animals. My fan continued, saying:

“Seduce people with meth?? You should be ashamed of yourself to write this article. You comparing Joe to the people as a whole in Oklahoma is ridiculous. He deserves to rot in prison. People like you promoting his illegal actions is what’s wrong with this world.”

I should clarify that I do not condone Meth. But I do condone embracing our state's bizarre culture. We're founded on cheaters, it's in the name. The Sooner State. There's cut-throats, bible-thumpers, good ol' boys, weirdos, deviants, and some good folk peppered throughout Oklahoma, like anywhere else. I was happy that Oklahoma got exposure. For once, all eyes were on us, and not in the face of a national tragedy or political scandal.

Is Joe Exotic a good person? Absolutely not. Did he probably murder those animals, cheat the system, and be an all-around awful person? Yes. But worse things have been said about presidents and celebrities, and we celebrate them like religious icons. Joe Exotic is, for better or worse, now an Oklahoma icon...and he's putting us on the map. Should we not welcome it?

“TIGER KING” is one of Netflix's highest rated series, racking up the most streaming minutes within its opening week than any other series according to Nielsen ratings across Amazon Prime and Netflix, with users watching 5.3 billion minutes of the show. The series spawned a plethora of memes, Facebook groups, and even the eye of top Hollywood talent.

Just this Monday, May 4, it was announced by Variety that Oscar-winning actor Nicolas Cage (Leaving Las Vegas, CON-AIR, National Treasure) was tapped to star as Joe Exotic in a series from CBS Television, scripted by Dan Lagana who penned Netflix's “American Vandal” along with “Deadbeat”.

But that's not all. Oklahoma's platinum blonde homosexual cowboy also caught the eye of TV creator Ryan Murphy, a titan of the industry who birthed smash-hits like “GLEE”, “American Horror Story”, “American Crime Story”, “Scream Queens”, and “FEUD: Betty vs Joan”. Murphy is plotting a Joe Exotic-based drama with Rob Lowe set to star as Joe Exotic. Lowe is no stranger to Oklahoma either, as he starred in THE OUTSIDERS which took place in 1950's era Tulsa.

Also in the works is a series about Joe Exotic's arch-nemesis Carole Baskins, set to be played by Kate McKinnon of Saturday Night Live fame, recently appearing in the Beatles-inspired dramedy YESTERDAY last year.

While all of these projects are in very early development there's no way of knowing anything else about them, but in all likelihood they will probably end up filming right here in our great state, joining other high-profile projects like Matt Damon's film STILLWATER which wrapped in 2019 and Martin Scorsese's KILLERS OF THE FLOWER MOON based on the Osage Nation murders and the birth of the FBI.