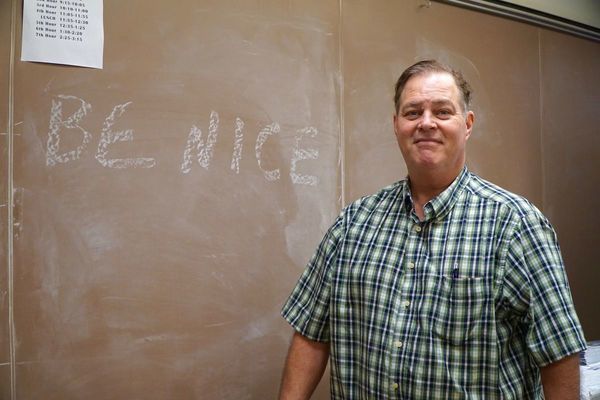 John Cherry was ready to go home for spring break, prepare for his upcoming retirement, and return to school to teach his students for a little while longer.   Then the coronavirus hit. Schools closed. And Cherry’s 36-year career in education ended nine weeks too early.

Schools across the nation closed in March in response to the coronavirus pandemic, leaving some graduating seniors without the chance to say their last goodbyes to classmates or walk across the stage with a diploma in hand. And teachers like Cherry were hit in the heart when schools hung it up.

Cherry, a history teacher, still had several topics left to cover with his students in those last nine weeks. To him, they were some of the most important topics.

Cherry has shown the 1993 film to his classes on an annual basis. The film tells the story of a World War Two-era German businessman, Oscar Schindler, who eventually turns against Germany's ruling political party and saves more than 1,000 Jewish people from being massacred by the Nazis.

The film is “hugely important” to Cherry because it teaches students about the history of the largest case of mass genocide in the world.

But the main reason he shows the film? It makes students feel for others. It forces them to be honest with themselves.

“I love teaching that movie and watching kids who apparently have no compassion start to show some, to see empathy in the eyes of people whom you really haven't seen it much before,” he said. “I think that's very important, and I will miss that.”

To Cherry, honesty is the best policy. That's what got him into education in the first place.

Before he was a teacher, Cherry was a businessman. After graduating from Kansas State University with a business degree, he became a restaurant manager, and he later worked as a salesman for the Conwood Corporation, which made generic popcorn for grocery stores and supermarkets, among other products. While working for the company, he returned to his old stomping grounds – Oklahoma City, where he was born and raised – to watch football games.

“I started going to the games again, and I hadn't been to a high school football game since I graduated from high school,” he said. “I got interested watching, and I was going to the games with a buddy of mine whose brother-in-law was playing on the team. That winter, after that season was over, he expressed to me that he was going to quit his job and go back to school and become a teacher and a coach.

It wasn't on a whim that Cherry decided to give up his sales career and attend college at the University of Central Oklahoma, one of the state's oldest colleges for educators. He'd been thinking about it for a long time. Deep down, he knew he had to make a change.

“Every once in a while, you've got to look in the mirror hard and ask yourself, 'Am I headed in the right direction?' … Don't lie to yourself, be realistic with yourself,” he said. “The No. 1 person you're going to lie to in life is yourself. It's not your mom and dad, it's not your spouse, it's not anybody else. It's yourself. Be honest with yourself about where you are and where you want to be.”

Cherry learned those lessons from some of his high school coaches.

“They were like my fathers,” he said. “I didn't have a dad. He wasn't around, and these guys were my dads. That's why I excelled the way that I did because I wanted to please those guys. All I'm doing is passing it on. I wanted to give back what they gave to me, and that's what I want these young people to do.”

Cherry tried not to let his pride get in the way of the truth – even when he told his students that he had been battling alcoholism.

For years, he has told his students that he is a recovering alcoholic. More than 20 years ago, he received treatment for his addiction. He had to stop teaching to take the treatment, but his principal at the time never told Cherry's students that their teacher was in a rehabilitation program.

Cherry said knew what he had to do: Go back to school and tell the truth.

“That was a single day when I was finally really, really, really true to myself,” he said. “And the crazy thing is, I've been telling kids for years not to drink and drive. … All those were the right words to say, but I was being a hypocrite. And for the first time, I wasn't.”

“Students feel like they're being lied to a lot,” he said. “When an adult just lays out everything for them – 'Look, this is the way it is' – when they know that it's kind of a gamble to do that, a lot of them say, 'I wouldn't have been able to do what you just did.' Well, someday, you might need to. You can't keep lying. You've got to tell the truth.”

While most students likely remember Cherry as their history teacher, he became an educator first and foremost so that he could coach football, he said. As time went on, however, he found that he valued his time in the classroom more and more.

His winning streak was better there.

The only real loss Cherry ever had in the classroom was a loss of time – nine weeks, to be exact.

But Cherry won't walk away from his career wishing it could have ended differently. He's going out on a high note. He wanted to see his students again, he said, but he knows he put his heart into his work.

“I know I could have always done better, but overall, I think I gave it a good shot,” he said. “I certainly tried. And I loved it. I really enjoyed just seeing some of them realize that history is not just about a bunch of dead people. It's about human beings interacting with others, and it doesn't matter if they're wearing a toga or modern clothes. It's humans interacting with humans, and there are important lessons to be learned on how to do that and how not to do that.”

Yes, his time with his students was cut short. But his love for his students? That's timeless. Honestly.

“It's not just about history, it's learning about people, treating them right,” he said. “I hope they realize that I love them.”