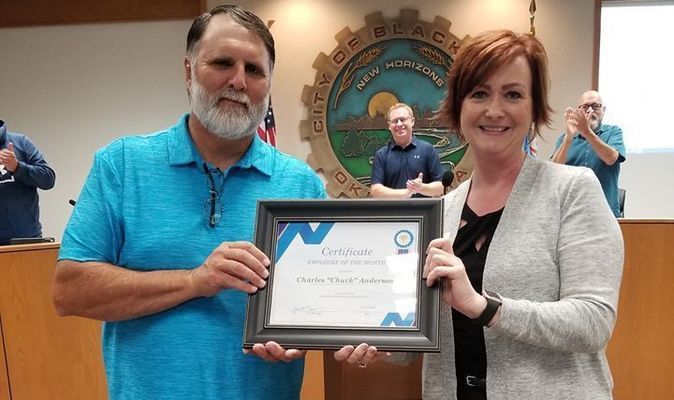 The meeting began with the observance of the National Day of Prayer, which is observed on the first Thursday of May, “inviting people of all faiths to pray for the nation.” The theme was “Pray for God's Glory Across the Earth.”

Chuck Anderson, supervisor for the Blackwell Streets and Parks Department, was recognized as the Employee of the Month by Smith, who honored Anderson's work for and dedication to the the City of Blackwell.

“Anything we ask Chuck to do, he always does,” Smith said. “He does it so well. The sidewalks and everything we have are a testament to the work him and his department does.”

Anderson commented that he gives credit to the men he works with. He received compliments from Vice Mayor Steve Marquardt and Mayor T.J. Greenfield.

The Council received a call from Guernsey Engineering's Chris Carlsen regarding renovations at the livestock pavilion at the county fairgrounds. Officials plan to install exhaust fans in the building.

The Council approved the item.

Smith then gave a statement regarding the city's sales tax revenue increase during the time of the coronavirus pandemic, praising Blackwell citizens for supporting local businesses. Her announcement received a round of applause.

The City Council approved a memorandum of understanding with Stillwater Medical Center. It allows the Event Center at the county fairgrounds to be used as an alternative overflow site in the event of a natural catastrophe or emergency event, such as the coronavirus pandemic.