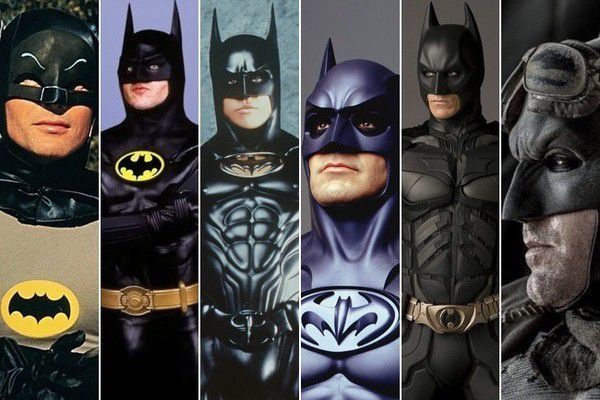 With Robert Pattinson set don the iconic cape and cowl in October 2021 alongside Paul Dano as The Riddler, Colin Farrell as The Penguin, Zoe Kravitz as Catwoman, and acclaimed actors Jeffrey Wright and Andy Serkis as Commissioner Gordon and Alfred the Butler under the direction of Matt Reeves, it's time to countdown on Batman through the years in cinema.

The culmination of Christopher Nolan's “Dark Knight Trilogy” from 2012 was a wet-fart of a film. Bloated and boring, this is perhaps the most mind-numbing entry in Batman's exhaustive film catalogue. Batman's nemesis Bane, played by Tom Hardy, was about as menacing as a pitbull with a spiked collar, and the film's few good moments were eclipsed by the frankly boring direction and plot. While the film's ending is awesome and there's some parts of great emotion, it is painfully obvious that the passing of Health Ledger as The Joker derailed what could have been a perfect trilogy.

I'm in a very small camp of individuals who didn't care for the first Batman. Frankly, it bores me to watch. I appreciate how groundbreaking it was for the time, but it might be my least-favorite Tim Burton film by virtue of being too simple. The aesthetics and cast were all great, but something always prevented me from enjoying it. Maybe because Joker is one of my least-favorite Batman antagonists?

Yeah, I know what you're thinking. While BATMAN & ROBIN essentially is regarded as a terrible film and effectively buried any interest in Batman until it was rebooted in 2005, I have come to love it. George Clooney is an awful Batman, but I think the film gets by on general weirdness alone. Arnold Schwarzenegger as Mr. Freeze, Uma Thurman as Poison Ivy...and it serves as a tonal throwback to Adam West's campy and ridiculous Batman series. BATMAN & ROBIN reminds us of the beauty of adaptations- they don't always have to be the same. Different artists have different visions, as Joel Schumacher's campy, neon-lit, ridiculous orgy of leather ass-shots as one-liners is just as respectable as Tim Burton's gothic fairy tale, Chris Nolan's realistic crime drama, and Zack Snyder's brooding anti-hero.

Zack Snyder's sequel to 2013's MAN OF STEEL isn't exactly a “Batman movie” like the others, but is debuted the short-lived turn Ben Affleck had as the menacing Dark Knight. Portrayed in this entry as a cynical alcoholic chasing glory through death and brutality, Affleck's Bruce Wayne lived a hard life. While this film was more focused on bringing the “DC Universe” together with Wonder Woman, Aquaman, Superman, and more it served as a glimpse into what could have been with Batfleck. He was a tank of a man inspired more visually by Frank Miller's DARK KNIGHT RTEURNS comic. Sadly, we won't see him again...but it was fun to speculate what his world was like.

Christopher Nolan's sequel to 2005's BATMAN BEGINS traded the first film's more theatrical concepts and super-heroics for a more grounded take on Batman and Gotham City inspired more by films like Michael Mann's HEAT than comic books. What it gave us was one of the most influential blockbusters of all time, partly propelled by Heath Ledger's untimely death before the film and his role as menacing and terrifying Joker that won him a Golden Globe for Supporting Actor. THE DARK KNIGHT broke and reinvented the wheel, and will stand with Sony's SPIDER-MAN (2002) and Fox's X-MEN as comic book game-changers.

Christopher Nolan's reinvention of Batman was set in an industrial and smokey Gotham City with a fresh-faced and charismatic Christian Bale as Bruce Wayne/Batman. Featuring a fantastic cast of iconic faces like Michael Caine, Gary Oldman, Liam Neeson and Morgan Freeman, this entry blends the fun and action of Joel Schumacher's iterations with the right dose of comic book fantasy that made Tim Burton's so iconic. BEGINS is in many ways a perfect film.

When Joel Schumacher was handed the reigns for Batman's third cinematic entry, he did so with the kind of feverish, homoerotic, psycho-sexual, and giddy camp-mayhem he injected into such genre classics like THE LOST BOYS, FLATLINERS, PHONE BOOTH, and 2004's PHANTOM OF THE OPERA. What we got was something eye-catching and bold. Dark and brooding while still being sexy and fun, with Val Kilmer's Greek-God jaw, flowing blonde hair, and...of course...nipples on the Bat-suit. 'FOREVER' has been treated better with age, with respect paid to Jim Carrey's Riddler and Tommy Lee-Jones' Two Face, and who could forget the iconic Seal song, “Kiss From A Rose”?

My personal favorite Batman film, and one of my favorite movies ever, BATMAN RETURNS was Tim Burton at his most Tim Burton. With a script that is written like a sonnet, with constant rhyme schemes that would make The Bard blush and a Gothic Christmas setting, RETURNS is a modern fairy-tale and one of the boldest takes of a comic book character to exist. Lead by Michael Keaton, he's upstaged here with the jaw-dropping Michelle Pfeiffer as Catwoman and the disgusting Danny DaVito as The Penguin. RETURNS is oppressively dark, sinister, and cruel but has an almost ethereal charm and beauty as we marvel at these leather-clad black titans of moral depravity dueling in the falling snow.

HBO's WATCHMEN is necessary in the age of masks...

'Unity' is part of 'Community' during COVID-19

Steps for a successful senior year