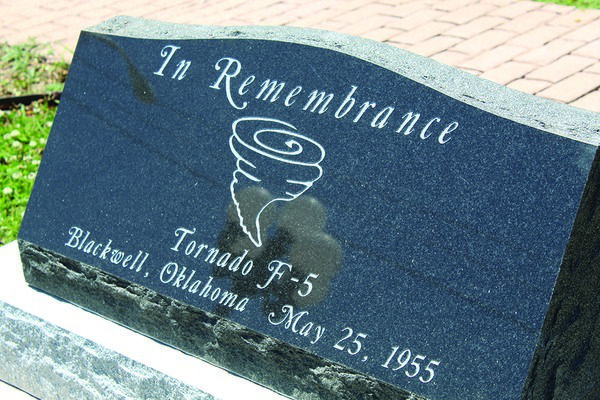 Blackwell's Top of Oklahoma Museum has placed two new eye-catching memorials on its lawn in honor of the 65th anniversary of the May 25, 1955 tornado.

The tornado claimed more than 100 lives during the Great Plains Tornado Outbreak, which produced 65 tornados, including two EF-5 tornadoes in Blackwell and Udall, Kansas.  The memorial displays honor the 23 lives lost in Blackwell.

The museum planned to open a tornado room featuring interactive and immersive displays this month. The coronavirus pandemic that began in March put a hold on that for the time being, Museum Director Melissa Hudson said.

“We are preparing to reopen the museum for visitors again soon, and we're hard at work to make the Top of Oklahoma Historical Society Museum the best it's ever been, with our tornado room to be open later this year, as well as our new hardwood floors we have,” Hudson said.  The tornado room, currently under construction, has a “damage wall” with artifacts from the wreckage of 1955. It will include dioramas and displays that capture life before, during, and after the devastating events of that May day.

A book titled “Without Warning: The Blackwell Tornado of 1955,” is set to be published and debuted at the museum's tornado room unveiling. Author Ginny Goresen said that the book will be released to coincide with the tornado room's opening. “I couldn't have done any of this without the help of Melissa Hudson here at the museum, and The Blackwell Journal-Tribune,” Goresen said when she was in town to promote her book in January. “Melissa helped me get everything that I needed, and the BJ-T was more than helpful with getting me archives and photographs. Their articles from that time were so informative and on-the-ground.”

Goresen said she interviewed more than 40 people for the book, and added that she had plenty of jaw-dropping photographs as well.  The book is set to be published by the Oklahoma Hall of Fame. It is co-written by Oklahoma historian Bob Burke and has a foreward by acclaimed Oklahoma meteorologist Gary England.

Earlier this year, the museum underwent extensive renovations. Funds for the project were provided by the Blackwell Public Trust Capital Improvement Fund and the Blackwell Public Trust Private Project Fund. The projects were completed in late March, with over $300,000 in improvements being made to the roof, ceiling, and walls. Museum officials also conducted fundraisers to help pay for new carpet in five rooms of the building. Anonymous donations helped pay for the new carpet as well.

The museum will reopen to the public May 18. Visitors will be required to wear masks while in the museum.