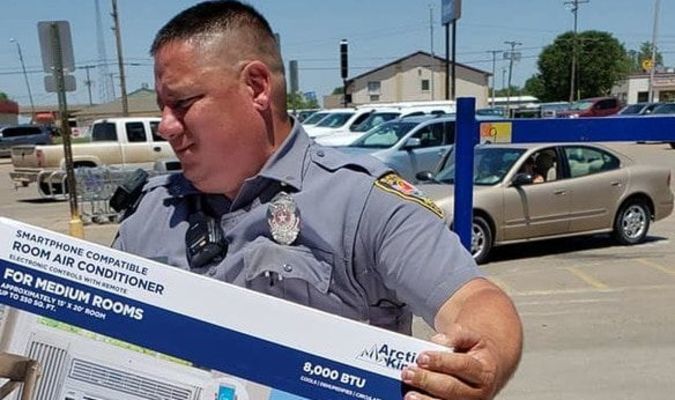 As the temperature in the family’s home rose higher and higher, Blackwell police officers responded in a “cool” way.

On Friday afternoon, members of the Blackwell Fraternal Order of Police – the city’s police union – teamed up with the local Walmart to provide new air-conditioning units to a woman whose sole unit had quit working.

The woman, whose name was not released, has five children, according to Nick Grove, president of the union.

“This sweet lady gives a tremendous amount of her time to our community and our youth,” Grove said.

Union members went to Walmart and bought two units for the woman, and Walmart employees agreed to “chip in” on the purchase.

“Lt. [John] Mitchell was called about people whose air conditioner quit working, so we pretty much just took a vote with our FOP and asked everyone if it’d be OK if we went and bought some air conditioners for her,” Grove said. “All the members were like, ‘Yes, Sir. If she needs them, we’ve got to go get them.’”

Police officers across the nation have come under fire since the May 25 death of George Floyd, a black man who was asphyxiated by a Minneapolis police officer, after Floyd allegedly tried to purchase cigarettes at a gas station with a counterfeit $20 bill.

Grove said it’s important for officers to maintain the trust of the communities they serve.

Grove thanked employees of the local retail store, saying they “never hesitate to help out on any project.”

“We are proud to serve such a wonderful community,” Grove said.