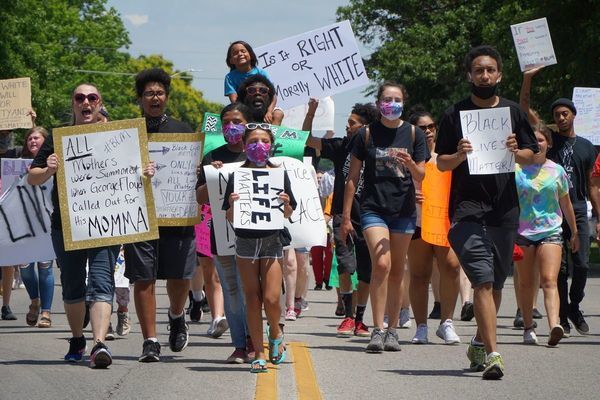 Ponca City is a rural, predominantly white community. But the people here are different, they say.

On Monday, hundreds of people marched from Ponca City High School to City Hall in this Kay County community with a population of roughly 24,000 to protest the death of George Floyd, a black man who was asphyxiated by a Minneapolis police officer May 25. Across the nation, protesters are advocating for reforms of police departments and government agencies.

In Ponca City, they chanted. They sang gospel songs. And they supported one another peacefully, protesters said.

Masters said she feels the Black Lives Matter movement has been well received in Kay County.

“Personally, I think it goes over pretty good,” she said. “We’ve always gotten along here. We don’t have the trouble that the big cities have.”

Emmons, a local business owner, said he wasn’t worried about his downtown businesses being vandalized. He said he’s happy to help effect change.

“I honestly believe that it’s a loving community,” Emmons said. “That’s why I’m invested so deeply in Ponca City. If this is what it takes to change the world, then by God, let’s do it. It’s time. We’re a nation of do-ers. Let’s do it. Let’s fix this. … I’m out here for love. If you can go on the golden rule, we’re all in this together.”

Across the street, Tadd Tompkins and two other men wearing protective vests carried rifles and radios. They said they were there to discourage protesters from damaging local businesses.

“We’re not counter-protesting,” he said. “We’re out here to ensure the safety of our city. We hope everybody that is protesting has a good day and that they enjoy our city. And we want to make sure that we’re here to enjoy it again tomorrow – that it doesn’t get burned to the ground, people get beat, stores get robbed. It’s just not the place to do it.”

Some protesters marched down 5th St. toward Grand Ave., where City Hall is located. They chanted “No justice, no peace” and “We all stand together.”

“I thought that being on horseback would make a bigger statement,” Harbeson said.

At protests across the country, speakers have discussed alleged police brutality in police departments large and small. In Ponca City, speakers also addressed the way their children are treated in public schools.

Local motivational speaker Aletha Kearney said the nation’s education system is inherently biased because it is funded with property taxes, revenue from which is often higher in larger communities with populations that are mostly white.

“We see racism at the schools,” she said. “Our precious, sweet babies are going to school, and their dreams are being crushed a little bit every day. They’re called disruptive, lazy, and difficult. Babies are having to hear this. I had a teacher in high school tell me I would never be anything because I talk too much. Guess what? I’m still talking.”

Jeanne Williams, a mother to four biracial children, organized Monday’s rally because she wants to show her children that they should be treated fairly by law enforcement.

In Ponca City, she feels that they have been. She said the local police chief, Don Bohon, marched with protesters and made everyone feel “safe.”

“Ponca City’s different, I’m telling you,” she said. “Marching down, there were no negative signs out there. There was nobody that was out there trying to discourage us. There were more people walking with us, no matter what color they are, and I really feel like Ponca City as a community, as a whole, comes together.

“It makes us feel loved here.”

Blackwell Police 2020 statistics: crime down in...