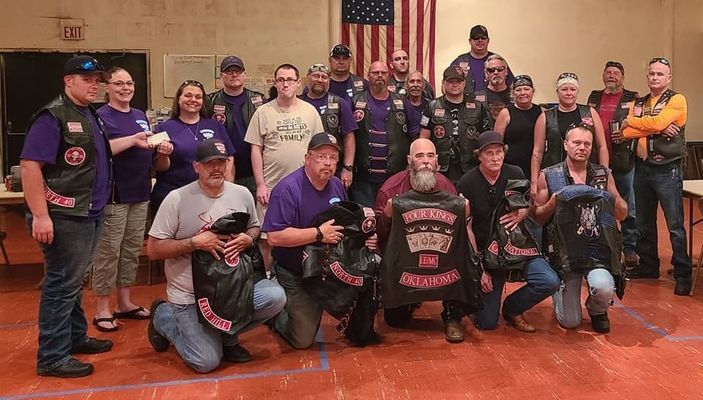 Kara's Game won't be having a regular season this year due to the coronavirus. But thanks to Four Kings, a local biker club, the organization received more than $700 to go towards its operations until things can return to normal.

Dana Colson, vice president of Kara's Game, said that officials with the organization were “beyond thankful” to Four Kings members for their support of Kara's Game. Colson said the organization is also thankful to members of the Blackwell VFW chapter, who hosted the Kara's Game Poker Run earlier this month. The event featured a concert from a local band named “New Dynasty.”

“We have a lot of medically fragile children and adults who get involved with Kara's Game, from playing to coaching, and there was no way we would be having a regular season this year in the midst of all that's happening,” Colson said. “We hope to see everyone in the fall if things really settle down and get better. We hope to do something then where we can all play ball. We're eager to see the kids, and to have fun again.”

Kara’s Game began in 2014 in honor of Kara Mitchell, a child with special needs who died in 2013. It started as a game for children with special needs before growing into a tournament and then into an entire league. In 2017, Kara's Game received a $25,000 State Farm grant to go towards the “Field of Dreams,” a handicap-accessible sports complex that will host Kara's Game. The complex is still in progress, Colson said.

“Just before everything was shut down due to COVID-19, we were meeting with architects and engineers, ready to get the go-ahead, planning everything out,” she said. “That will have to wait until things really settle down, but we're looking to move forward with the Field of Dreams as soon as possible.”

Kara's Game will once again operate a fireworks stand starting June 24. All proceeds from the sales of fireworks will go towards Kara's Game. Those who wish to donate can do so through Kara's Game's Facebook page.