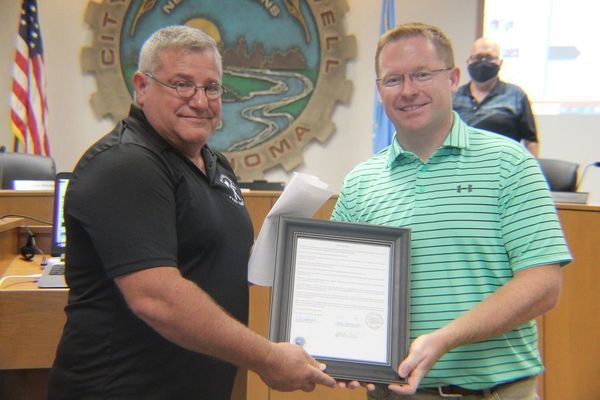 McIlnay was given the Outstanding Citizen Recognition in honor of his various services for the betterment of Blackwell. He arrived as the First United Methodist Church's pastor in 2013. He has participated in a litany of community initiatives, including a bicycle giveaway, an annual Easter egg hunt, and the construction of a disc golf course. He has also written weekly columns for the Blackwell Journal-Tribune.

A tearful McIlnay accepted a framed proclamation from Mayor T.J. Greenfield and was soon honored by the Blackwell Police Department and Blackwell Fire Department. McIlnay started the chaplaincy program for the departments.

McIlnay was given a Key to the City and was presented with a slideshow, which set to a mash-up of two songs: “Somewhere Over the Rainbow” and “What A Wonderful World” by the late Hawaiian singer Israel Kamakawiwoʻole.

Following the recognition, Council members heard from Anne Elfrink with Elfrink & Associates regarding the city’s annual financial audit. Elfrink noted that her agency’s opinion of the city was “clean,” with one exception being the city's maintenance of records of its spare parts inventory. Elfrink cited it as a “weakness” in regards to year-end reports of parts purchased, used, and counted.

Greenfield asked if the city is making any effort to rectify that moving forward. City Manager Janet Smith confirmed that the city is.

The Council approved Seacoast Roofing and Construction to repair leaks at the Top of Oklahoma Museum for $4,790.00.

The Council also approved a measure to seek bids for a uniform service.

The Council approved the city’s annual police service agreement for the 2020-2021 fiscal year with the Blackwell Fraternal Order of Police. The Council also entered into an agreement with the town of Braman for assistance with animal control services.