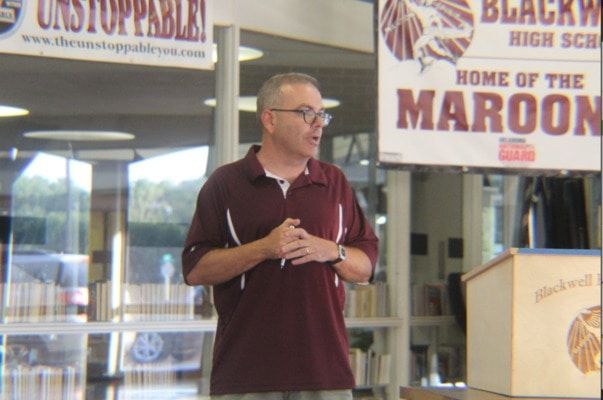 Superintendent Shawn Haskins spoke to teachers and parents, asking for input about what precautions school officials should take when starting back up in the fall in the face of the ongoing coronavirus pandemic.

“When they open schools again, things will be different,” Haskins said. “That much I can tell you. Each school is going to be different. Our world is leaning over on its side right now. It's not good. Health-wise, politically – things aren't good.”

“We need input,” Haskins said. “If anyone has any ideas or suggestions, please email me, or Coach [EJ] Edgar, or a teacher in our district, and they will forward that to me. My grandma used to say two heads are better than one, and I'm a firm believer in that.”

Traditional learning, Haskins said, is when “every kid comes to school, that's what we've been doing. Just like normal.”

Blended learning is when students come to school and learn from home in shifts.

“If we have to call school off for a week, or a couple of days, we'll go to blended,” he said.

Blended learning would be a contingency plan for another mass cancellation of schools similar to the one that led schools across the world to close following spring break. That was when the coronavirus pandemic began.

“It's what we just came out of, but this time, we'll have a plan,” Haskins said.

Distance learning was “scary,” Haskins said. This plan would keep children at home completely, where class will be done online only. He explained that one of the downsides of distance learning is something he knew of, but that no one at the state level seemed to realize: Internet access in rural Oklahoma isn't great.

“Hofmeister's push right now is to get better internet in more homes,” he said. “That's what she plans with the COVID money. I don't think that'll happen by August – but maybe in five or six years.

“Some districts are giving the students the option of choosing which method they want. That's something we're undecided on. That's why we're requesting input from the community. We need input from parents.”

Haskins added that he does not want the school to lose students due to the new learning plans.

“I don't want anyone to leave the district,” he said. “I want to be accommodating. It's going to cost us money either way, but it's something we'll have to do. If I have two kids in high school who want to do distance learning … we'll make it happen. We have to. I want every parent in the community to feel their kid will get an education, and that they'll be safe.”

Haskins said he is a fan of traditional learning. He said he feels that social interaction and class structure are important for developing minds. However, Haskins also said that some students thrive online at home.

“The State Health Department foresees a spike [in cases of the coronavirus],” he said. “They see it coming. I want to be prepared.”

Haskins said that the district has enough Google Chromebooks to provide laptops for children who might not have electronic devices. But he said that the area where students are hurting the most is with internet connectivity.

Haskins said the district couldn't reasonably afford to buy internet “hot spots” for each individual who might need one.

“I'm an optimistic person,” Haskins said. “I don't want to wear a mask. I don't want to live in fear. I can't imagine kids growing up and having to deal with this right now. It's not right ... but I'm not going to rush anything or force anything.”

Haskins said the district plans to conduct another meeting July 15. He hopes to present a plan regarding the return to school.

Haskins’ office is in the school administration building at 201 E Blackwell Ave. He may be reached via phone at 580-363-2570 or via e-mail at shaskins@blackwell.k12.ok.us.