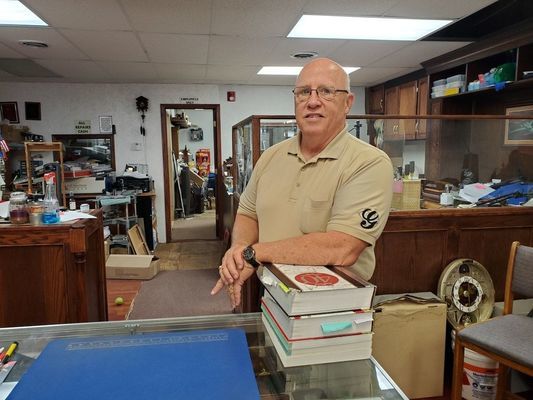 Ralph Gose has been named the parade marshal for the Blackwell Area Chamber of Commerce’s annual Fourth of July Parade.

Gose is known to many as the owner and operator of Gose Jewelers on N. Main St., which has been a Blackwell staple since the 1920s. But some may not know that the owner himself served for 8.5 years in the U.S. Navy’s submarine service from 1971 to 1979.

“It’s more stable down there than you would think,” Gose said. “If you weren’t told you were inside a submarine, you wouldn’t know.”

Gose did tours of duty from Fort Lauderdale to Connecticut and from San Diego to Hawaii. During that time, he got used to being underwater, he said. The confines of a submarine are easier to adjust to than one would think.

After completing his service in the Navy, Gose returned to Blackwell, where he took over the family business. Gose Jewelers was established in 1923. Since the 1970s, Gose has had his hands full fitting rings, fixing clocks and watches, and tinkering with almost everything mechanical.

“I think people don’t consider the intricacy of doing this,” Gose said. “There’s so many tiny parts, so much to work with.”

Walking around the store, Gose showed off his grandfather clocks, rings, and more. He said can do one order a day or nine. It just depends on the day.

“People can bring me one ring to fit and adjust, or they can bring me a whole box,” he said, looking over a table strewn with cogs, wheels, and tiny screws that are almost invisible to the untrained eye. “At any one time, I’m working on something.”

When he was told he’d be parade marshal, he said, “Not me.”

“Of course I was honored to be considered,” Gose said, “but I thought there were so much more deserving people than me. Of course, it’s an honor to be a part of this tradition though, and I look forward to seeing everyone on the Fourth of July.”