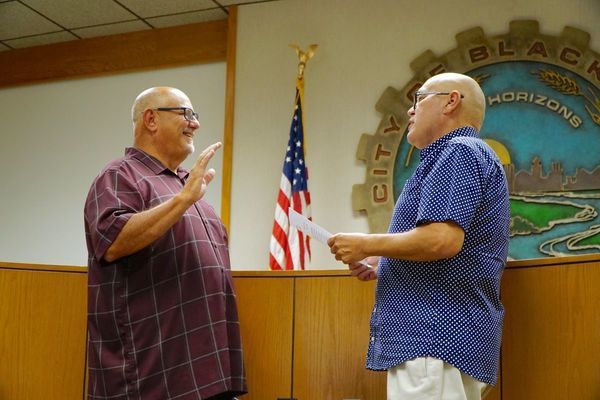 Political newcomer Glenn Cox took the oath of office Monday to become the mayor of Blackwell.

Cox and his supporters gathered for a swearing-in ceremony in the City Council's meeting chambers at City Hall Monday at 4 p.m.

After taking the oath of office, Cox said he's ready to serve the people of Blackwell.

“It feels good,” he said. “I can't wait to get started. I'm ready to get everybody together and go to work. Hopefully we can change things around here and get our whole city together.”

City Manager Janet Smith said she feels Cox will offer a new perspective when discussing some of the city's biggest issues – among them, infrastructure.

“We welcome Mayor Cox as part of the City Council and look forward to hearing his perspective on current infrastructure needs as well as future projects for the residents of Blackwell,” she said.

Marquardt said he is eager to work alongside Cox for the betterment of the community.

“I am looking forward to the new mayor coming aboard,” Marquardt said. “His goal is to get us all moving forward, and I can't wait to see how he will lead us.”

Cox is a retired dispatcher for the Blackwell Police Department, and he formerly held management roles while working for oil companies. He and his family are active in youth sporting activities in the community. He and his wife, Kasey, have two young children: Brooklyn, age 9, and Raylan, age 8. Cox also has three children – Chad, Zach, and Kendall – who live in the Oklahoma City area.

Kasey Cox said she is proud of her husband.

Glenn Cox's first meeting as mayor will be July 16.