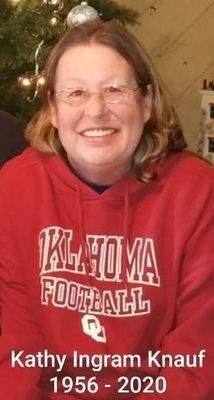 Celebration of Life Services for Kathy Ingram Knauf , 64, Tonkawa, Oklahoma, will be held at 2pm on Saturday July 11, 2020 at Blackwell VFW Post 2855 located at 1006 W. Ferguson Ave., Blackwell, Oklahoma. Services are under the guidance of Amy Stittsworth Funeral Service and Cremation. Kathy's service will be officiated by John West of Blackwell, Oklahoma. Kathy was born on January 18, 1956 in Margaretville, New York, the daughter of Bruce Ingram and Carrie Ingram. Kathy passed away Tuesday July 7, 2020 in Stillwater, Oklahoma.

She married Michael Knauf, October 30, 2003 and they lived together in Blackwell, Oklahoma and Tonkawa, Oklahoma until his -death on February 4, 2017. Kathy’s previous employment consisted of K-mart stores and Bippo company. Prior to her death, she had worked several years at Tonkawa Casino. Kathy was the type of person that would help anybody if she was able. She had a big heart and a strong ear. Her deep compassion and magnetism attracted people near and far. Her personality made her a joy to be around, her laughter was contagious, she knew no stranger. Kathy will be deeply missed by her friend and family.

She was preceded in her death by her husband and parents. She is survived by brothers Jim Ingram and wife Mary (Altus, OK), David Ingram and wife Vicki (Blackwell, OK), and sister Pamela Gilyard and husband Otis (Palm Coast, FL); Brothers Wade Johnson and Elwin Johnson, and sister Misty Quigley – all of New York; brother in law, Jerry Knauf and wife Cheryl, sister in law, Donna Knauf, and father in law Gerry Knauf – all of Kansas; as well as nieces, nephews and many friends.

Kathy was a strong supporter of her military family. Memorial donations can be made in her name to the Veterans of Foreign Wars, Blackwell Post 2855, 1006 W. Ferguson Ave., Blackwell, OK 74631.