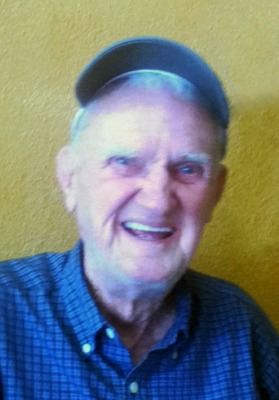 2020 in the Chapel of the Trout Funeral home of Tonkawa. Military honors will be presented by the United States Navy with burial following in the Tonkawa IOOF Cemetery. Pastor Joshua Reese of Christian Life Church will officiate. The grandsons will serve as casket bearers. Viewing will be available at the funeral home on Tuesday from 9am-8pm.

Speck was one of nine children born to Ernest and Nellie (White) McKinnis. He was born at home on March 12, 1924 in Tonkawa where he spent his childhood and received his early education. In Feb. of 1943 Speck joined the United States Navy and proudly served our country as a Torpedoman 3rd Class. He was discharged on Thanksgiving Day, 1945.

On April 25, 1945 he married Velma Mae “Sue” Eaton in Newkirk. They were married for 65 years before her passing in 2010. Speck worked for Blackwell Smelter for over 25 years and was later employed as a pipefitter for Local Union #767 out of Ponca City. He retired from his job in 1987.

Speck and Sue enjoyed many winters as “snow birds”, traveling in their camper to Texas where they made many close friends. He loved to fish and was always up for a good game of cards or a trip to the casino. He never passed up a chance to dance and definitely never met a stranger. One of his favorite pastimes was sharing a cold beverage with friends who stopped by his garage for a visit.

We know that Speck is sitting on a heavenly river bank on his 5 gallon bucket, casting out his chicken livers. His laughter, love and stories will be greatly missed.

Memorial contributions may be made to the Christian Life Church, 115 W Grand Ave. Tonkawa, OK 74653.