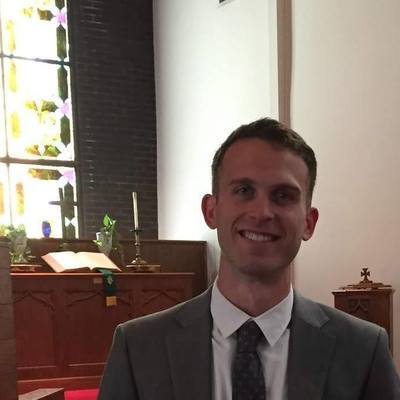 Daniel Gibbens-Rickman didn’t always want to be a pastor. But when God called him to the ministry, he knew he had to answer.

“I believe God has led me here, and He will continue to lead me into whatever it is He wants to do through me while I’m here,” he said.

Gibbens-Rickman was born in Lubbock, Texas to Twila Gibbens and Mark Rickman, both of whom were Methodist pastors. After leaving Texas, he and his family moved to Claremore, Oklahoma, and Tulsa, where Gibbens-Rickman spent much of his childhood.

In college, he studied German language at Hendrix College in Conway, Arkansas. He studied abroad in Germany during his junior year, and he taught English at high schools in Austria for two years after graduating with his undergraduate degree

He attended the University of Missouri to obtain a master’s degree in German studies once he returned to the United States. He completed the degree and moved to Nowata, Oklahoma, to help his brother Jeffrey, who serves as the pastor of the Nowata United Methodist Church.

Gibbens-Rickman wasn’t always a serious follower of Christ, he said. He was 24 years old before he decided to make faith an important part of his life.

“And that was after a couple of years of really looking into the faith, reading the Bible for the first time through, and visiting with other Christians and talking about faith,” he said. “After deciding to follow Jesus and consider myself His disciple, it probably took me about a year and a half to go from deciding to be a disciple to full-blown pastoral ministry.”

Gibbens-Rickman attended Asbury Theological Seminary in Wilmore, Kentucky, one of only a handful of seminaries affiliated with the United Methodist Church. There, he felt called into the ministry by the relationships he developed with people through scripture.

“I realized that all Christians are called to ministry, and so I wanted to be a very active Christian,” he said. “I wanted to follow Jesus and do ministry, and at the time, I was intent on doing that in some form related to German, but just being a very wholehearted Christian. Over time, a number of people encouraged me to look at myself as a pastor and consider pastoral ministry. And, eventually, they got through to me, and God spoke to me in that.”

“Not only were they professors, they took on a pastoral role with me,” he said. “I got to see how they took their teaching as a form of ministry and pastoring, and also, as I got to know them, learned about what they had done in ministry. In the past, many of them have done local church pastoral ministry in various capacities, some of them in the United Methodist Church. Also, I was growing alongside peers who were engaging in ministry in various forms, and I continue to have many friends who are in different kinds of ministry, and I’m looking at what they are experiencing and learning and how they’re leading.”

Asbury, which Gibbens-Rickman described as a more orthodox and conservative school, was the right fit for him, he said.

“Asbury was a place of prayer and relating over our faith,” he said. “The classroom experience that I had while there was meaningful to me. We prayed in class, and they led us in singing hymns. Our professors were not only feeding us information and teaching us to be critically-minded, but were also trying to build us up in our faith. They have a very pastoral role and wanted to guide us and encourage us.”

Gibbens-Rickman is taking his final class in seminary, and he’ll walk across the graduation stage in November. In the meantime, he’s excited to lead his first church.

“I’m fresh in the ministry,” he said. “I’ve, of course, been involved in various churches, and worked in a couple of churches – and helped lead in a couple capacities – but this is my first pastoral charge.”

While he’s somewhat accustomed to small-town life, Gibbens-Rickman isn’t familiar with the practices of farming and ranching. He hopes to learn more about local culture, even though he has no intentions of ever raising his own crops or cattle.

“I’ve never been hunting, I’ve never done any kind of ranching or farming, I don’t understand the world of – really, much of relating as strongly to the land as many people here do,” he said. “Fishing, hunting, guns, that’s all pretty foreign to me. But it’s all stuff that I’m eager and excited to learn about.”

Ultimately, Gibbens-Rickman hopes to grow in his walk with God while in Kay County.

“I love God, and I want to know him better,” he said. “I don’t have it all figured out, I don’t have all the answers, but I do know Jesus, and I do believe He can and will speak to anybody who has ears to hear through me.”

Pastor Mike's Musings: 2021 Is for Jesus