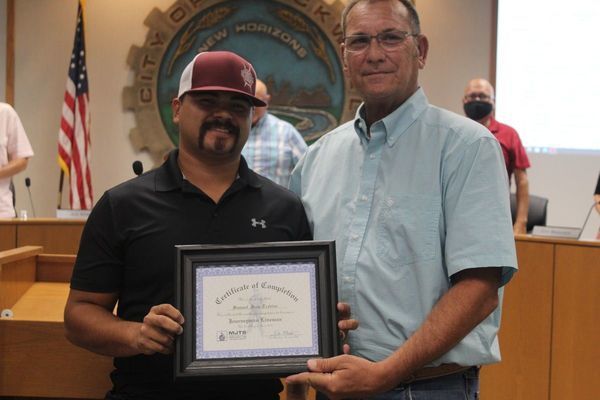 John West from the Bethesda Church opened the meeting with a prayer, which was followed by the Pledge of Allegiance.

Following the Pledge of Allegiance, Electric Department Manager Greg Sixkiller named Ivan Trevizo the Employee of the Month for his completion of a four-year lineman training program.

Webb then questioned the City of Blackwell's expenses.

“We paid for motel rooms for your friend while he was here for $700,” Webb said to Smith. “Is that customary?”

Smith asked who Webb was speaking of. He replied: “[her] friend, the attorney,” referring to R. Stephen Haynes, who stayed at a hotel in Blackwell for a few days in early 2019 while conducting a special investigation into alleged misconduct at City Hall. The investigation centered on potentially improper contracts and purchases made between former mayor T.J. Greenfield and the city. The investigation had already been approved by the Council.

Smith replied that it is customary for the city to provide lodging for someone that would be doing work for the city.

“Is this purchase on the agenda?” City Attorney Bryce Kennedy asked.

“No,” Webb replied. “Uh – it was a previous one. If we can't be transparent, is there a problem with that?”

The audience began to “Boo” Webb before the Council moved on, approving the consent agenda.

The Council heard from Chief Financial Officer Frank Crawford. Council members then discussed convening in executive session to discuss economic development and yet another performance review of Smith, among other items.

Vice Mayor Steve Marquardt asked why the Council would repeat the performance review that was conducted in May. Webb said there was “new information” that he would like to discuss.

Marquardt reminded Webb that the Council had already conducted a review, discussed Smith’s contract, and hired her for the year. Webb repeated that he had information to discuss.

Councilman Tom Beliel made a motion to convene in executive session but to exclude discussion of Smith's contract. The Council voted in favor of the motion.

Upon returning to open session, the Council discussed a ban on fireworks within the corporate limits of the City of Blackwell. Fire Chief Cory Hanebrink recounted a devastating house fire caused by fireworks during the Fourth of July weekend that sent two firefighters to the hospital.

Hanebrink noted that, since fireworks have been allowed in Blackwell, they have increased substantially in size and power, prompting a need for action. Councilman Richard Braden asked if other areas had similar ordinances regarding fireworks. Hanebrink said some municipalities either allow them only at designated spots on the night of Independence Day or they do not allow them at all.

The Council performed the first reading of the ordinance banning the lighting of fireworks within the city limits, but noted that the sale of fireworks would still be permitted. The ordinance will be discussed again further along with an ordinance about grease traps at restaurants.

The Council then approved the purchase of a microfilm scanner for the Blackwell Public Library. The Council also approved an agreement with Guernsey Engineering for the reconstruction of 13th St. and Ferguson Ave. near the hospital, and approved designs for a sidewalk in the area.

Council members also approved a building design from Guernsey for a storage shed that will be used to house the fire department’s Homeland Security response truck. The shed will be built near the former Red Cross building at the intersection of 13th St. and Ferguson Ave. This will become the fire department’s second location, allowing firefighters to have easy access to both sides of the city, local schools, and the industrial park.