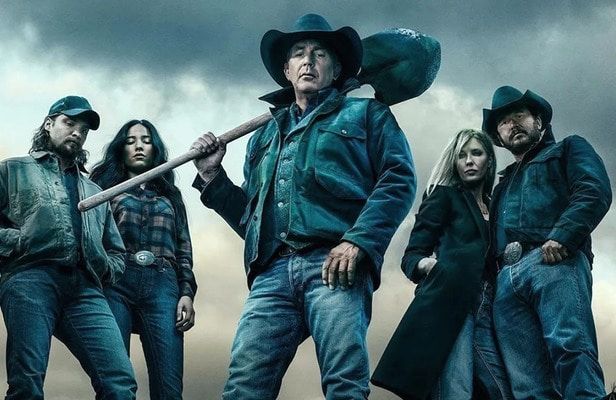 “We're not supposed to be here. Reservations were supposed to be temporary. We were supposed to to learn how to be white, then go live in the cities so this land could be sold too. But we didn't learn to be white. Wouldn't. And now, here we are. The government doesn't help because it doesn't want to- it wants us to die. It wants us gone. Because it wants the land. That's all it's ever wanted. That's why I want our land back. All of it. So we can build lives they can't take away.”

This tragic monologue acts as a stark semicolon before the dramatic period at the end of Sunday night's Season 3 episode of Paramount Network's YELLOWSTONE titled “All For Nothing”. The words come from the stoic lips of Gil Birmingham's Chief Rainwater who speaks to Kayce Dutton's Indigenous girlfriend Monica after a search for a missing Indigenous teenager from the Rez brings horrifying results.

The episode, very heavy thematically, also finally revealed what exactly Jamie (Wes Bentley) did to his sister Beth (Kelly Reilly) to make her hate him so much, and the truth is dark. In previous flashbacks we understand a 15 year old Beth was pregnant with Rip's child and, terrified, had Jamie take her to the Indian Health Clinic on the Rez for an abortion...but Jamie, panicky and with his family's “best interests” at heart, had them give her a forced hysterectomy.

"When you consider the pain you cause a person the person's fault? That's evil, Jamie,” Beth tells him. Jamie believes if Beth were more careful, there wouldn't have been need for an abortion or forced hysterectomy... who knew the same show could feature “Guy on a Buffalo” and tackle heavy hitting topics like sterilization and victim blaming In the span of a 5 minutes?

Beth reveals this to her father John (Kevin Costner) who has somewhat of a breakdown, angrily declaring all of this work is for nothing. All the land, all the work...and he'll have only one grandson to give it to.

The episode brings the season's themes of “land” and generational woes on a collision course that will be, no doubt, knotted together tragically within the next four episodes. It also sheds light on the missing and murdered Indigenous women by spotlighting the National Indigenous Women's Resource Center with it's timely story about a missing teen from the Rez, which gives a national and worldwide platform for a movement struggling to find a voice.

Writer and showrunner Taylor Sheridan first got himself involved with the missing and murdered Native women, cross-jurisdictional boundaries, and lack of resources Indian nations face with 2017's gut-wrenching drama WIND RIVER about a murdered and raped Indigenous woman, which was largely ignored come awards season because the Hollywood elites, the Academy, and their peers consider “all voices” equal in film until it comes to Native Americans. Sheridan has also submitted congressional testimony in support of Savanna's Act which passed in 2018 to update the online data entry format for federal databases relevant to cases of missing and murdered indigenous women.

Gil Birmingham, a Texas native and Comanche, tweeted about the importance of last night's episode stating “Native women are murdered at a rate of 10 times the national average. Learn more about murdered and missing indigenous women and girls and how you can help at the National Indigenous Women’s Resource Center” before providing a link to niwrc.org

Oklahoma currently sits in the Top 10 for states with the highest number of missing and murdered indigenous women and girls with 18 cases, per a study released in January 2019 from the Urban Indian Health Institute stated, and on May 5, 2020, a Ponca City-based group called the Missing and Murdered Indigenous People of Northern OK- Indian Territory became the tenth chapter of its kind in Oklahoma. They can be found via Facebook.

The season is winding down, but the action is amping up. You NEED to watch Yellowstone.