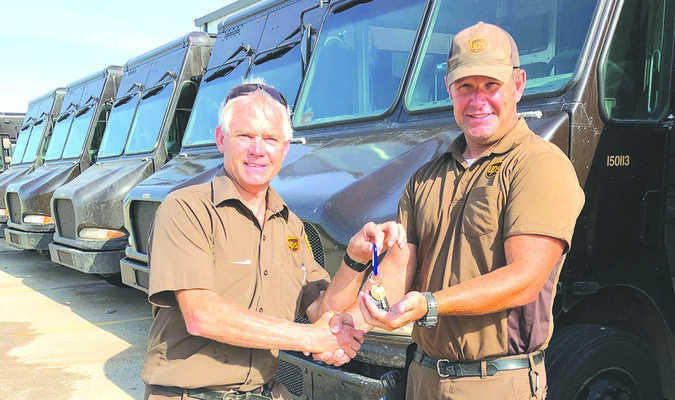 Mark Strange has shown up to work early each day since August 18, 1988.

As he walks in the door, he greets his coworkers with a friendly “Hello,” grabs the keys to his UPS delivery truck, and takes off to deliver packages to eager customers across northern Oklahoma.

Through rain, sleet, and snow, Strange has never faltered in his mission to get people the products they’re waiting for.

“Mark excelled in a career that is not easy,” his supervisor, Charlie Lickliter, said. “The strain a UPS driver puts on their body is unknown to the general public.”

Strange, a well-known local delivery driver for UPS, is retiring after a 32-year career with the nationwide parcel delivery service. His last day on the job will be Aug. 10.

Lickliter recently approached the Journal-Tribune and told us about Strange’s retirement. Strange doesn’t know we were writing this article, but we suppose the secret’s out now.

Strange was hired off the street to work as a UPS driver based out of the company’s Ponca City facility. That’s a feat in and of itself, his boss said.

“This is a rare occurrence at UPS and has only happened once in the Ponca City center since,” Lickliter said. “UPS promotes from within and rarely hires outside of its own people. To say Mark was a good hire would be an understatement. Mark has been a great asset to the UPS and the community.”

Strange is loved not only by his coworkers, but also by his customers, Lickliter said. One of those customers is the Journal-Tribune.

Local businesses often pay to have pre-printed advertisements placed in the newspaper. Those advertisements, called “inserts,” are printed at facilities across the nation and delivered to the Journal-Tribune via UPS. We then have them tucked inside newspapers to be taken to homes and stores.

“Mark is such a kind person to work with,” Journal-Tribune Publisher Tina Anderson said. “He always delivered our packages to us on time, and timeliness is vital to our business. He brought a smile to our faces each time he walked into our office to bring us our inserts. We will greatly miss seeing him and wish him the best as he begins the next chapter of his life.”

In all of his years on the job, Strange has never had a single injury. His boss called him an “industrial athlete.”

“I have worked with Mark for over 25 years, and it has been a great honor,” Lickliter said. “Mark set and led by example. We never had to worry about Mark. We knew he would go out and get the job done. Period. Mark set the tone for what UPS expects of our employees.”

Strange has been named a 30-year Circle of Honor driver for UPS. In his time with the company, he’s mentored new employees, served on safety committees, and worked with managers and co-workers as a Union Steward to successfully resolve workplace issues, his boss said.

Lickliter joked that Strange will “probably work more as a retiree than when he was a driver.”

“As sad as it is to see Mark go, we are very happy that he is going to be able to spend more time with his family,” Lickliter said. “Mark has three children and five grandkids. Mark has plenty to do to keep himself busy. He is a member of a local band that plays often. He enjoys fishing and doing home remodeling projects.”

He'll be missed by the people of UPS, but he’ll not be forgotten.

“UPS and its employees would like to wish Mark a happy retirement, and we would like to wish him well in his future endeavors,” Lickliter said. “We hope that Mark will still come by and see us as time allows. We look forward to seeing him grow a beard and long hair. Mark was a valuable asset to us and will be hard to replace, but we know Mark deserves this after 32 years of dedicated service to UPS.

“Mark Strange will be missed when he retires – not only as a dedicated, hard-working employee, but as a friend.”