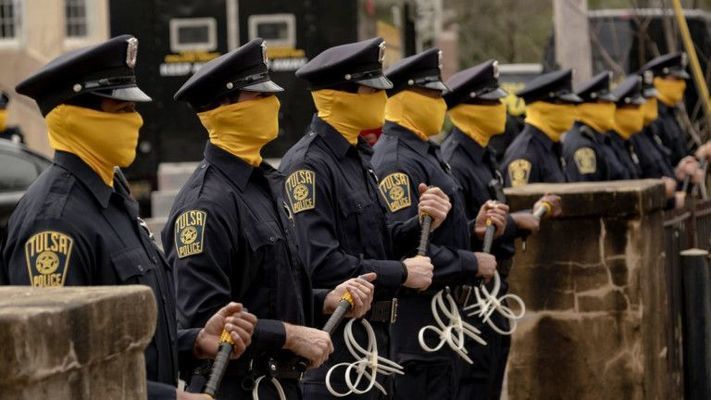 “People who wear masks are driven by trauma.”

With the 2020 Emmy Nominations being read last week, the winner seemed clear.

WATCHMEN is a series that aired a few months ahead of it's time. Based on (and acting a sequel to) Alan Moore and Dave Gibbon's iconic graphic novel, WATCHMEN takes place in a world where superheroes exist, Americans are ruled by the fear of an unseen threat, and racial tensions are mounting as white supremacists battle against police in Tulsa, Oklahoma while an African-American detective for the Tulsa P.D. Attempts to solve a generational mystery.

The iconic graphic novel was adapted for the big screen in 2009 by director Zack Snyder, and while many had various issues with the liberties the film took, they should be happy to know that the HBO drama is a sequel to the comic book, not the 2009 feature film.

Surely there was no way that HBO could have known the country would be wrapped up in a pandemic that brought the world to it's knees, much like the constant threat and cautionary fear of the space-squids in WATCHMEN...nor could they have known that in the wake of George Floyd's death that major cities would be seeing white supremacists, protestors, police, and even costumed vigilantes with masks (sanitary or cosmetic) battling it out on the streets.

WATCHMEN is especially relevant as it is centered around a future where President Robert Redford (yes, that one) has allowed black Americans reparations (Redfordations) if they were effected by or descended from the Black Wall Street Massacre in Tulsa's Greenwood district in 1921 which has since been rebuilt as a stunning, thriving, community. Currently, in real life, excavations are underway for supposed mass graves in the area.

WATCHMEN tells a story of generational wrongs, while also giving us some fantastic action, stunning costumes, lavish sets, stellar acting, and of course a story worthy of attention.

HBO is heavily committed to the noir-business, and certain flashback episodes of WATCHMEN regarding the superhero named Hooded Justice take place in the seedy, smokey 1930's and 40's much like the atmosphere of current HBO darling PERRY MASON. It's a fantastic show to watch, entirely anchored by performances from Regina King, Tim Blake-Nelson, Jeremy Irons, Don Johnson, and Louis Gossett Jr.

Newcomers might have a few questions going into the series if they had no exposure to the universe beforehand, but the show does a good job at filling in the blanks for people that might not want to read the 500+ page graphic novel or watch the nearly 4-hour “Ultimate Cut” of the film.

WATCHMEN, as a franchise, deals with masks and authority. It asks uncomfortable questions about the nature of superheroes, and why we would want to be them. Do these “heroes” who hide their identity from the world to escape judgement or potential consequence not do it for the same reason as, say, members of the KKK?

We vilify white supremacists with “batcaves” of Klan robes and racist works because of their cowardice for hiding their true selves, but we idolize superheroes for the same reason?

In WATCHMEN, the Tulsa P.D. Wear striking yellow masks to conceal their identity from hate groups- black or white.

And in today's world where folks start riots and protests over being encouraged to wear sanitary masks to stop the spread of disease, it makes you wonder. Truly. Is it concealment we are supposed to fear, or exposure?

WATCHMEN is available on DVD/Bluray and, also, to stream on HBO Max.