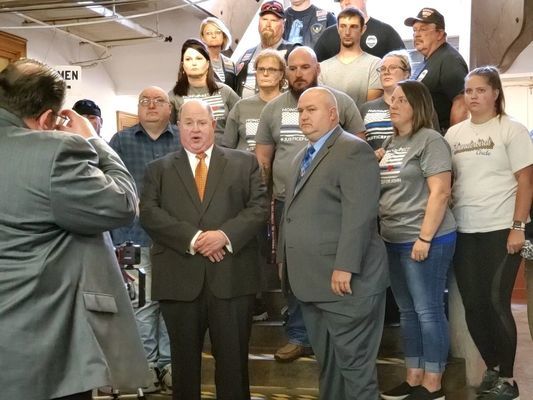 It was another day in court for Blackwell Police Lieutenant John Mitchell on Monday in Newkirk and similar to the court dates in May and July, the judge ordered the attorneys to file some additional information in the next 30 days before any further rulings are made.

Special Prosecutor Jason Hicks has to file his brief first by August 17 and Mitchell’s lawyer then has ten days to respond to the court. District Court Judge Lee Turner indicated he would set a hearing date once that is all turned in and he has reviewed the briefs and is ready to make a ruling.

The issue raised Monday afternoon by Judge Turner that he wants additional information on the ballistics information in the case because he had not seen any evidence showing Lieutenant Mitchell fired the fatal shot(s). Judge Turner seemed to be disappointed that the prosecutor was not ready to make oral arguments on Monday. Gary James, Mitchell’s attorney has already addressed several ballistics issues in prior court filings and is one of the multiple issues listed to quash the indictment.

The issue of who did what first and who was shooting at who and when did Mitchell get involved has been a major issue in some of the earlier briefs because some of the facts in the brief were never presented at the preliminary hearing in Perry earlier this year.

Both legal teams had already turned in written briefs after the May 26 hearing and then again in late June and early July on the motion to quash.

The prosecution had indicated in May that they were filing some amended information, but according to court records there still has been no new information filed. The original charges of second degree murder were filed in November 2019, but a court later dropped that charge to Manslaughter. The original incident was in May 2019.

The Blackwell Journal Tribune will continue following the case with updates on blackwelljournaltribune.net as they become available.

Blackwell Police 2020 statistics: crime down in...