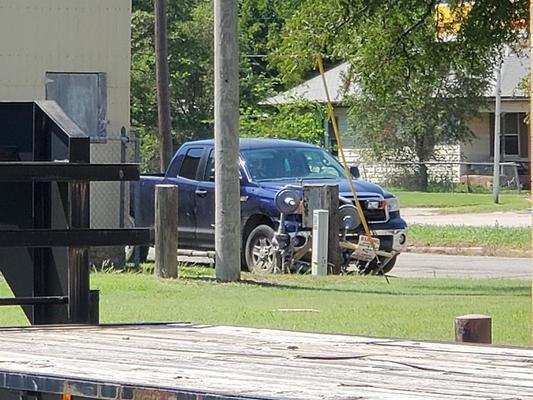 Blackwell's quiet Friday afternoon was thrown into disarray when a motorist struck a natural gas regulator located near the intersection of Main Street and Lincoln Avenue.

Blackwell Police Officer Cory Ingram responded to the scene of the collision shortly after 2:30 p.m. Aug. 14. The driver, a male Blackwell resident, turned off of Main Street and drove east onto Lincoln Avenue. He then swerved to avoid hitting a dog in the road, the man told officers. After swerving, the man’s own puppy allegedly fell from the seat of his truck onto the floorboard.

When the man attempted to pick his puppy up, his truck crashed into the gas regulator, the driver allegedly told officers. As a result of the crash, first responders temporarily closed off more than four blocks of Main Street and evacuated residents from three nearby homes.

“We were called out to locate our lines with the gas company,” Water Department Manager Jim Hoos said. “The gas company is very meticulous and careful when they do things, so we had to make sure we helped them to the tee.”

“It was a great example of cooperation across our departments,” Chief of Police Dewayne Wood said. “We were all out there helping in some aspect.”

“It was an all-call,” Fire Chief and Emergency Manager Cory Hanebrink said. “Braman [firefighters] assisted us on standby while we worked the gas leak. Everyone worked excellently together, and it just goes to show that we couldn't have a better crew of people here.”

Blackwell Public Power Department Foreman Darrell Steelmon said his workers assisted in any ways that Hanebrink asked them to.

“We didn't do nearly as much as the fire department did,” Steelmon said. “They did an outstanding job, especially in that heat. We shut off power for a few blocks, blocked intersections to relieve the F.D., and provided water. We assisted where we were needed, and we were happy to do it.”

“Last Friday's gas line emergency called to action our police, fire, electric, and street department personnel in order to maintain the safety of our community and its residents,” City Manager Janet Smith said. “I commend their efforts and their commitment to quickly come together to mitigate the crisis and to work with CenterPoint Energy throughout the night until that line had been repaired.”