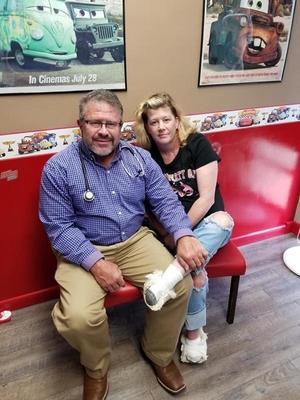 “I just started feeling sick, and then I just got worse,” she said. “I remember telling my mom and them that my legs were hurting real bad, and that’s all I remember.”

Paramedics took Moore to the Blackwell Regional Hospital April 14, though she lost consciousness before she arrived. Doctors then sent her via ambulance to the Stillwater Medical Center. She stayed there for one night before being transferred to the Mercy Hospital in Oklahoma City.

When Moore woke up in the Oklahoma City hospital, she had already been there for a month. She couldn’t speak. And when she looked down at her hands and feet, she was confused.

Doctors amputated Moore’s feet and hands less than one week after she was bitten by a black widow spider. The infection from the spider bite spread throughout her body, settling in her extremities.

Moore, 47, suffers from systemic lupus erythematosus, a disease that causes the body to attack its own immune system. Her body couldn’t ward off the infection from the spider bite, leaving doctors with no choice but to perform amputations.

In total, Moore was in the hospital for almost three months. She was on a ventilator for two weeks and underwent at least three surgeries, she said.

Doctors cut off the front parts of her feet, leaving only her heels. They cut off her right hand, though she was able to keep her palm and part of her thumb on her left hand.

Moore was released from the hospital in mid-June. When she got home, her life was “completely changed,” she said.

Moore’s mother, Jackie Cowen, has to help her daughter eat, write notes, and use the restroom, among other tasks. Moore said she’s thankful for her mother’s assistance, though it’s hard for her mother to do “everything for her.”

“It’s still a daily struggle,” she said. “I still get really frustrated because there’s things I want to do myself, and I like to try to do it myself first. I see if I can do it. … If I can’t, I get upset.”

Two weeks after coming home, the first thing Moore wanted to do was something she hadn’t done in nearly three months: walk.

“They wouldn’t even try to let me walk in the hospital,” she said. “I moved my legs all the time, trying to keep them strong. I didn’t walk until after I came home … I don’t know how long it took me. I finally just got brave and got up out of the chair and took a couple of steps, you know, hang on to something until I could just do it.”

With only her heels to support her, Moore had to find tools to help her walk. She taped medical footpads, protective devices designed to keep a person’s foot from blistering, to the bottoms of her heels.

“I was in Hutton’s Pharmacy one day, and me and Mom were looking around, and we just happened to come across them,” she said. “I said, ‘Let’s just try them.’”

Moore puts socks on her heels and then affixes the footpads to her heels using tape. The pads are square-shaped and made of cloth, giving her heels cushioning. But unlike shoes, the pads have no coverings on top, leaving her heels and socks exposed to the weather.

She’s tried to work around the problem. When rain falls, she places plastic shopping bags over her footpads. When snow falls, she wears thicker socks.

Moore knew those “fixes” could only be temporary. In February, she decided to find a permanent solution.

‘I WILL MAKE IT HAPPEN’

Moore asked Phil Green, a local physician’s assistant, about getting prosthetic feet. Molded out of plastic and other materials, prosthetics are designed to look like human feet, allowing people to wear regular shoes.

Green referred Moore to the Hanger Clinic in Oklahoma City, a clinic that specializes in making prosthetics.

Green tried for five months to get an appointment for Moore. In March, doctors across the state indefinitely cancelled elective medical procedures in response to the coronavirus pandemic.

In mid-August, Moore finally got to talk to a doctor from the clinic.

Moore is a member of SoonerCare, the state’s Medicaid program. While SoonerCare would pay for the cost of Moore’s visit to the clinic, it wouldn’t pay for the prosthetics themselves.

“She finally got an appointment, and they saw her,” Green said with tears in his eyes. “They said, ‘Yeah, we’d be glad to make you prosthetics. It’s going to be $800.’

“And she sent me a message crying. She said, ‘After all this time to get in, I don’t have the money for that.’ So she was going to cancel her appointment.

“I said, ‘Don’t you dare cancel that appointment. I will make it happen.’”

“I just found some stuff around the house that I wasn’t using, and I thought, ‘Well, I can auction that off. I’ll get close, and we’ll see how much money we come up with up.’ I figured I’d just pay the rest,” he said.

He dug through his home and picked out a .22 pistol, several boxes of ammunition, and a mirror with the head of a deer etched into the glass. Cowen, Moore’s mother, agreed to put in the auction three quilts she had made.

Green took pictures of the items and posted them to Facebook so he could auction them off in an online raffle-style event. He planned to sell tickets for $50 each.

When Green announced the auction on Facebook at 3:07 p.m. Saturday, he didn’t expect to raise the $800 sum needed to buy Moore a set of prosthetics.

“Within 10 minutes of the post, I had a family who wanted to remain anonymous say they’d just pay for it in full, for the prosthetics she needed,” Green said. “I asked if they wanted all of the items from the auction, and they said, ‘Nope. Auction it.’”

Minutes later, another family stepped forward with another $800 check. That family also told Green to keep the items from the auction. Their donation was followed by “tons” of people who donated various amounts of money, ranging from $50 to $200, Green said.

Within a few hours, Green had raised enough money to buy Moore at least two sets of prosthetic feet. And as for the auction? He said he’ll still raffle all of the items off Tuesday afternoon.

Like shoes, prosthetics wear out with use and time. Having multiple sets is important for Moore, who intends to stay active, Green said.

“With this auction, she should be able to get three or four sets of prosthetics,” Green said. “She’ll actually look like she has feet again.”

When Moore heard about the donations, she broke down in tears.

“I think I cried more that night than I have cried in my life,” she said.

“I’ve cried all day,” he said. “They’re not my feet. I thought it was pretty cool. It’s amazing what people will do. They just look out for each other.

“I’m just proud of the people of Blackwell and everybody who donated. They helped one of our own. She sure wouldn’t have gotten it any other way.”

Now that she can afford the prosthetics, Moore is scheduled to visit doctors at the Hanger Clinic in early September. Doctors will measure her heels and begin the process of making her new “feet.”

Moore said she’s still overwhelmed by the outpouring of generosity she’s seen from the people who donated money to help buy her prosthetics.

Their kindness taught her a lesson, she said.

“I know I’ll never be able to thank them all,” she said. “And I know that I couldn’t have done any of this without Phil. He’s my rock. He helped keep my spirits up. I don’t know what I’d have done without him and his wife, Julie.

“I know there’s still good people in the world.”