Two Blackwell newspapers compete for story of Will Rogers' death 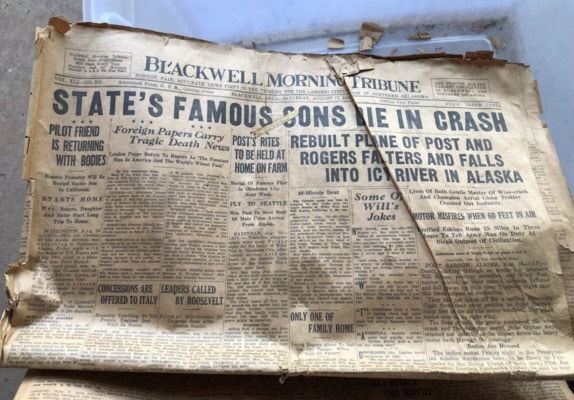 The bold headline spread all the way across the front page of The Blackwell Morning Tribune on Aug. 17, 1935.

Rogers’ legacy is synonymous with Oklahoma’s history. Eighty-five years after his death, the comedian’s words of wit and wisdom live on in the hearts of Oklahomans. Perhaps his most famous saying is this one: “I never met a man I didn’t like.”

How did people in Blackwell learn about Rogers’ death? By reading the city’s two daily newspapers.

The Blackwell Daily Journal and The Blackwell Morning Tribune were fierce competitors when Rogers’ plane went down. Both newspapers subscribed to various news wire services, including the Associated Press, which provided the hometown papers with stories and photos from around the world.

The Morning Tribune – which advertised itself as providing “honest, fair, and accurate news, first in the Tribune” – published the following story on the front page in its Aug. 17 edition. (It took time for news to travel back then.)

“They had just taken off for a trifling 10-minute flight from their river position to Point Barrow. Sixty feet in the air the motor misfired. The plane heeled over on its right wing.

“The lives of both the gentle master of the wisecrack and the champion aerial globe trotter were crushed out instantly as the impact drove the heavy motor back through the fuselage.”

It’s unclear which newspaper was the first to publish a story telling of Rogers’ death. But in a front-page editorial on Aug. 21, The Daily Journal bragged that it was the first of the two newspapers to print photos of the plane crash.

“It is to be hoped that none of the other excellent newspapers invading this territory will take umbrage if it is pointed out that the home edition of Monday’s Journal enjoyed something of a monopoly in these parts of the first pictures from the scene of Friday’s Rogers-Post tragedy,” the editorial read. “Four relays of planes from Point Barrow, telephoto from Seattle, telemat from Kansas City by fast train and a speedy motor car from Ponca City enabled The Journal to give its readers copyrighted Associated Press photos, the first visual evidence of the mishap that brought sorrow to the nation and with especial poignancy to Oklahoma.”

The Journal got something else the Tribune didn’t have: A direct quote from Post’s wife when she heard about her husband’s death.

The paper reported that Post’s wife was in nearby Ponca City when she learned about the crash. She was “prostrated by grief,” The Journal’s headline read.

“PONCA CITY, Aug. 16 – ‘I wish to God I had been with him when he crashed,’ Mrs. Wiley Post, widow of the famed globe flier cried here today as she received word of her husband’s death in Alaska,” the front-page article read.

Though it had been “scooped” more than once, The Morning Tribune kept up the fight. On Aug. 22, the paper ran large photos of Rogers and Post on the front page. Using Associated Press stories, the paper also reported on the funerals for both men.

Ultimately, The Journal had better and more timely coverage of the plane crash than The Tribune did. But that wouldn’t matter for very long. In a few years, both papers would merge to form The Blackwell Journal-Tribune – the very newspaper you’re reading today.

Almost a century after the plane crash, the combined newspapers that told Blackwellites of Rogers’ death are still alive. The J-T is a weekly, and we don’t subscribe to any wire services like the AP anymore. We focus on reporting local news that has an impact on you.

But rest assured: If Oklahoma ever loses another man who never met a stranger, we’ll be here to tell you about it.