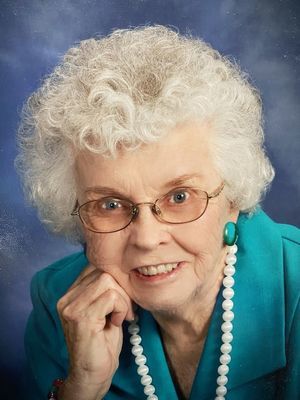 Pauline Lavern Merhoff of Blackwell, Oklahoma, went to be with her Heavenly Father early Tuesday morning, August 25, 2020 in Via Christi – St. Francis Hospital in Wichita, Kansas, at the age of 89 years.

Pauline McHenry was born on October 9, 1930, in Dilworth, Oklahoma, to Charles and Julia (Rothrock) McHenry. She grew up attending Blackwell Public Schools and graduated with the class of 1948.

As a young girl she enjoyed roller skating, tumbling and gymnastics, swimming, and diving. While in high school Pauline performed as high step twirler and majorette of the band.

Following graduation, she met her husband Donald Max Merhoff, while working at Lenker Drug. They married on March 18, 1949 in Blackwell. In 1950, Don left for the Koren War. Pauline went to California to be with her mother and sister, Viola, until his return. Upon his return, they had 2 daughters, Stephanie and Karen, and she served her family as a homemaker. She enjoyed making pastries, sewing, and raising her daughters.

She later worked for Southwestern Bell as an operator. She met many lifelong friends while working at First National Bank, where they formed a bowling league, which she enjoyed playing on until her retirement. In 1985 when her sister became ill, she went to California to help her. Following her sister’s death, she returned to Blackwell. Her husband retired in 1986 and they enjoyed traveling. They later moved to Palm Springs, California. In the late 1990’s, they returned to Blackwell. Her husband preceded her in death on August 2, 2015, and she continued to make Blackwell her home.

She was a member of the First Christian Church and the Harmony Sunday School Class. She was a volunteer at the Top of Oklahoma Historical Museum. She was also an avid walker with friends.

She is survived by two daughters, Stephanie Jarboe and husband Darrel of Cambridge, Kansas, and Karen Merhoff of Blackwell.

She was also preceded in death by her parents; four brothers, Lloyd, Robert, Orville and Everett McHenry; and a sister, Viola Russell.

Services are scheduled for 1:00 p.m., Monday, August 31st in the First Christian Church in Blackwell with Rev. Jeff Koch officiating. Burial will follow in the Blackwell Cemetery.

Casketbearers will be Wes Childers and Chris Childers.

A memorial has been established in her honor with the First Christian Church in c/o Roberts and Son Funeral Home, 120 W. Padon, Blackwell, Oklahoma 74631.