The Whitepond Murders (Chapter 3: Goin' Up) 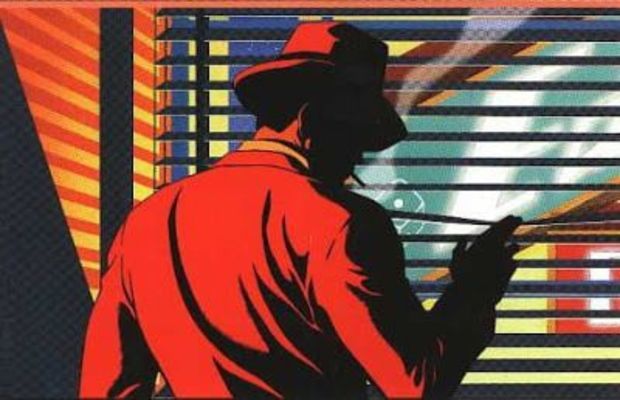 I was after the Community Talk Admin known as Big Kahuna. If Big Kahuna was the big cat runnin the litterbox, then I was the bird from Loony Toons coming to mess up his afternoon relief.

Lane, an innocent garbage man, killed because he got too close? I'd have to get closer. Deeper. Harder.

I returned to the newspaper office just a tick past the drinking hour, and Lane's widow, the buxom busty broad I'd come to know as Helga, was waiting for me, along with my boss, Dixie Casanova. Her red Corvette was parked by the front door, and the two dames were taking drags off their cigarettes, blowing smoke to the wind like a fog machine at a Halloween store.

Dixie's hair was blown out, big and curly from her pink bandanna. She was an 80's glam girl at heart, and the crop top she wore along with her leather pants made sure no one could forget it.

“Mahogany, you womanizing worm,” Helga stomped her cigarette out at her feet and approached me like a feral bird ready to rip out the straw eye of a scarecrow in a Wisconsin field. She raised her hand to slap me, and I caught her wrist in my massive, strong, grip.

I looked to Dixie, who rolled her eyes, unamused.

“I fired you three months ago, Mahogany,” she sighed, “I really don't know why you're still here.”

It was true. I was technically unemployed, turning cheap tricks outside Taco Bell for petty cash enough to afford cigarettes and vodka, but this was gonna get my career back. I was going all the way with this one.

Big Kahuna and his lady, Big Becky, lived in a lavish penthouse at the top of Whitepond's illustrious Palmal Appartments in the heart of the Meth District. According to Helga and Chett, Lane and a few others had accosted Big Becky during one of her rants. According to Big Becky, Jesus Christ himself (The Son of God) would return to aide our president in eradicating the Satanic pedophile cult known as The Order of The Following.

She removed Lane from the Community Talk group....then blocked him. Irl.

“If you go into those apartments, you might not make it back out alive...” Helga looked like she was about to cry. I didn't think broads could cry unless it was over nail polish or whatever women liked.

“Listen sugar, the only thing that can kill me is a downward spiral into crippling alcoholism slowly turning into a dependency on narcotics until I wind up half-naked with torn fish-nets on my legs and mascara running down my face after my body is dumped in a back alley behind the gas-station after I OD on airduster trying to get my kicks. And that might be tomorrow, but it sure as Hell isn't gonna be today,” My manly voice was enough to get her shaken to the core.

She grabbed the back of my head and kissed me hard with her mouth on my mouth, it was awesome. She even used her tongue a bit, which meant I was definitely going to tell my friends about it later.

I grabbed my 9 mm handgun, my shotgun, my blackpowder musket, my uzi, my lil uzi, my blunderbuss, my set of daggers, and my can of bear mace. I was ready.

Walking through the front door of the department complex into the lobby, the smell of urine was potent. After realizing it was just me having an oopsie, I moved towards the elevator bank ahead of me.

Posters were hung up on the walls advertising private screenings of children's movies that supposedly had deep messages about the New World Order. These posters were barley clinging the yellowed walls, caked in layers of smoke and filth from the years of depravity. They all had the same room number. Top Floor. The Crackshack Suites. I slammed my fist against the arrow to the top. I was GOIN UP...