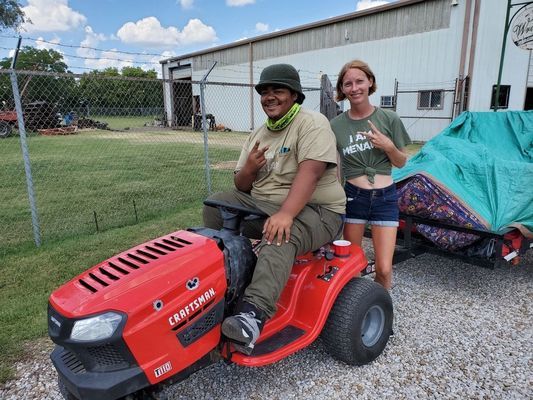 Participants in The Great Grass Race, a viral internet sensation, recently stopped by Blackwell on their mad dash from California to New York, backed solely by the kindness of strangers.

The Great Grass Race is a TV series that features six teams of people attempting to travel from California to New York by Oct. 10 on Craftsman lawn mowers, charting their own routes along the way. Teams must find alternative routes like side roads and open fields to drive on when traveling across the country.

The show’s Facebook page, followed by more 2,000 people, reads: “Six teams race across North America with just a lawnmower, a trailer, and people skills to rely on. No gas. No food. No money. The Great Grass Race debuts July 10 on watch.menacevision.com.”

The Green Team, consisting of Newkirk native Kassie Sisco and California resident and musician Clinton Brand, had a few minutes last week at Wright's Machine Shop on S. Main St. to explain their cross-country adventures while their lawn mower was being worked on.

“I got involved when my photographer put a cast out for it,” Sisco said. “I was nervous to take it because it was hard to leave my family and home. … But I took it to face my fears and try to get noticed so I can get my modeling and acting career going.

“Coming back to my home town felt so amazing. It felt like I was a celebrity, because everyone knows who I am.”

“It's something that shows the kindness of people during a time like this,” Brand said. “We can't pay for anything. We are doing this race because of people who choose to support us. In the middle of this pandemic and everything else going on, it's important to show that people are still good.”

People skills and an ability to wheel-and-deal for resources will be vital to contestants, the event’s organizers said. The teams will not be given food, gas or money, so they must rely on the kindness of strangers to acquire those items.

Denis Oliver, the producer of the show, said the teams are competing for a $100,000 cash prize.

The Great Grass Race is broadcast on Menace Vision, a free streaming platform on browsers and smartphones. The show is also available on the Menace Vision app on Amazon with a subscription.