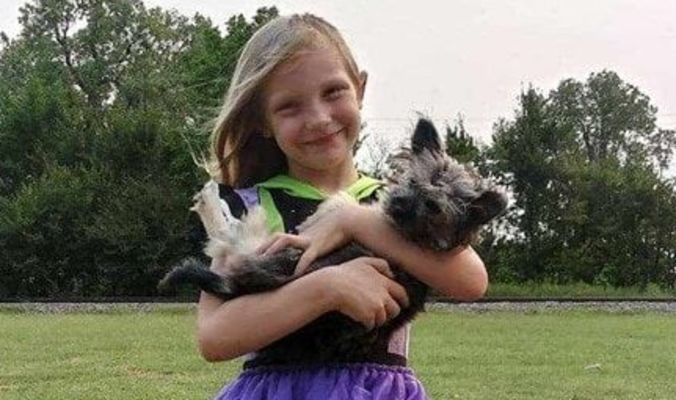 One week after Sveva Roberts’ seven-hour brain surgery was over, doctors unwrapped the bandages that they had placed around her head.

Roberts’ mother recalls what her daughter said when doctors peeled away the gauze.

“She looked at herself in the mirror, and she cried,” her mother, Heather Roberts-Grove, said. “I said, ‘What’s wrong?’ She said, ‘I look like a monster. My friends aren’t going to love me anymore.’”

Sveva Roberts, age 7, was severely injured when she was hit in the head with a baseball-sized rock while on a family camping trip in Minnesota in mid-July, her mother said. The Blackwell family was swimming when the accident occurred, and now, the family needs help paying their daughter’s medical bills.

The impact fractured the girl’s skull, and her brain began bleeding, her mother said. Roberts was taken by helicopter to the Mayo Hospital in Rochester. She remained there for three weeks as doctors removed half of her skull and inserted titanium plates.

“When she woke up, she had absolutely no skills,” Roberts-Grove said. “We had to feed her. She had to relearn how to walk. She still can’t use her right hand to write with. She had basically what you would consider, when somebody has a stroke, they usually lose one whole side of their body. She lost her whole right side – face, arm, leg, everything.”

To help Roberts recover, doctors have ordered her to take occupational, physical, and speech therapy several times per week. Slowly, she’s regaining some of her mobility, her mother said.

“Through therapy, now, she’s slowly gained everything back,” Roberts-Grove said. “She still has seizures. When she gets too tired or overstimulated, it’ll be worse. She’ll have a scar for the rest of her life.”

Roberts is attending school online this year to allow time for her therapy appointments, her mother said.

“She lost her ability to read,” her mother said. “She was reading at above second-grade level, and now she’s … about Kindergarten. She can’t write with her right hand. She’s learning how to re-write using her left hand.”

Finding therapists in the Blackwell area who can serve her daughter’s needs has been a challenge, Roberts-Grove said. But paying for her daughter’s medical procedures is a bigger problem.

“Mayo Hospital in Rochester doesn’t work with SoonerCare, so none of her medical expenses were covered,” Roberts-Grove said. “We just got the first part of her medical bills, doesn’t even cover the surgery or the hospital stay or any of the therapy, and we’re already at $50,000. That’s just to get her to the hospital. I don’t even want to know what a seven-hour neurosurgery costs.”

The family has set up a GoFundMe page where people can donate money to help pay their daughter’s medical bills. To donate, visit https://gf.me/u/yp92qq.

Doctors shaved the left side of Roberts’ head before her surgery began. That’s part of why she was shocked when she woke up from her surgery, her mother said.

The family was determined not to let Roberts feel alone.

“My whole family – me, my daughter, my sons, our family friend Rachel who came with us, everybody – we all shave the left side of our head to show her that she is not alone, and that beauty comes in all shapes and sizes, and it doesn’t matter what your hair looks like, you’re still beautiful,” Roberts-Grove said.

The road to recovery won’t be easy for Roberts, Roberts-Grove said. But she’s just thankful that her daughter is still alive.

“The doctors say it works in her favor that she’s seven,” Roberts-Grove said. “Her brain is still forming and learning and growing, so that’s a good thing.

“Each day is different, and we take it one day at a time. We’re just glad to have her. We’re very, very lucky that she’s here.”