Steelmon recognized as Employee of the Month; BIA invests in future 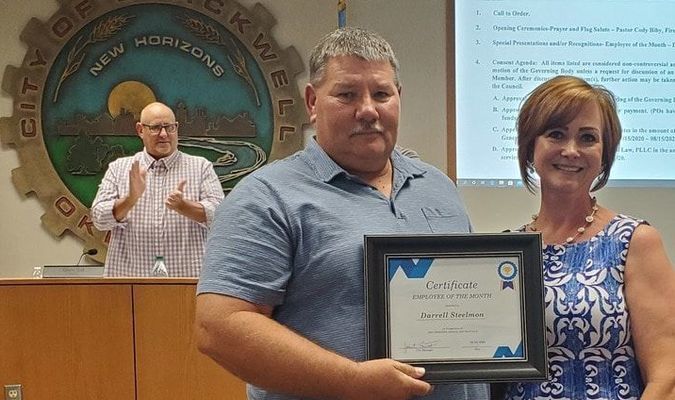 “[Darrell] has done a tremendous job leading these men, and it was time for us to recognize his leadership,” Smith said. “Darrell says that he'd be nothing if it wasn't for his department, and I'd have to agree. If I didn't have all of you, I couldn't do anything that the city has accomplished.”  Steelmon accepted the award, and some of his coworkers in the electric department jokingly chanted for him to give a speech.

“We have an exceptional electric department,” Smith said. “They are phenomenal – working after hours, anticipating the needs of our community, and constantly stepping up whenever it is asked of them. Whenever they are asked if they have a solution to something, they always provide it, and I just want to commend all of the electric department.” Council members then heard reports from various department officials.

Fire Chief Cory Hanebrink spoke first. He praised his firefighters, and he spoke about the teamwork between his department and officials with CenterPoint Energy when fixing a gas line leak in August.

Chief of Police Dewayne Wood also spoke about the gas leak, thanking his officers and others for the work they do. Steelmon gave a report about the electric department, noting its progress on an electrical project on Main Street and praising his department for work done around the city's event center. Steelmon said his workers plan to trim trees that are near power lines starting as early as October.

Chuck Anderson, supervisor of the Streets and Parks Department, spoke about roadwork at the intersection of 10th St. and Jefferson Ave. He then spoke about the department's upcoming work on Oklahoma Ave. He also said that the Blackwell Memorial Pool has closed after a successful season; however, the splash pad remains open. Code Enforcement Officer Jerry Weiland spoke to the Council next. Lisa Vargas, the city's head librarian, then bragged on the Blackwell Public Library for receiving the Chamber of Commerce's Spirit Award in August.

Jim Hoos, supervisor of the Blackwell Water Department, spoke to Council members about the department's busy month. Workers repaired several water line breaks and replaced water line equipment. He said he was “very proud” of his workers. John Robertson, executive director of the Blackwell Industrial Authority, spoke to the Council about a grant to be used for the construction of a 15,000-square-foot facility in the city's industrial park.

The goal of the facility is to entice wind energy companies to set up shop in the industrial park. Robertson said the work was a ripple effect of the CARES Act. A public hearing for Get Real Cable, LLC was then conducted, with City Attorney Bryce Kennedy reading a customer satisfaction survey regarding the cable entity. Get Real Cable officials pledged their continual support for the community and discussed improvements they've been making to their systems.

Council members voted to allow the Streets and Parks Department to purchase a new lawn mower, and the Council voted to replace HVAC equipment on top of the department's building on Doolin Ave. Council members then completed a training session with OMAG, which lasted almost one hour.