My Immortal: The Gothic Harry Potter fanfic you NEED to read 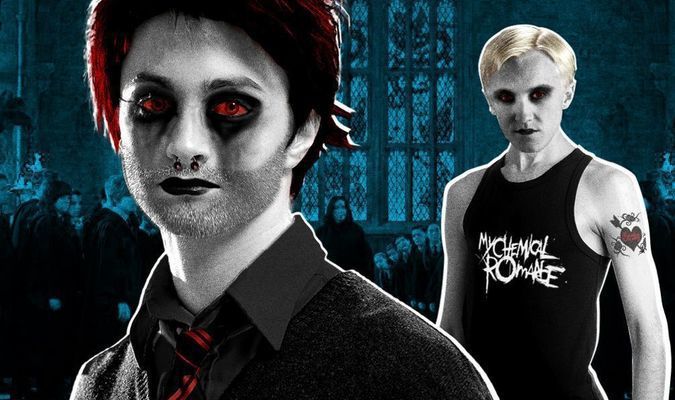 “I just wanna be with you ok Draco! Why couldn’t Satan have made me less beautiful?” I shouted angrily. (an” don’t wory enoby isn’t a snob or anyfing but a lot of ppl hav told her shes pretty) “Im good at too many things! WHY CAN’T I JUST BE NORMAL? IT’S A F****** CURSE!” I shouted and then I ran away.”

If that piqued your interest, sit down young one. You're in for a tale or two.

That quote comes from Ebony Dark'ness Dementia Raven Way, the protagonist of the so bad-it's-good Harry Potter fan-fiction titled “My Immortal” which sees Hogwarts School of Witchcraft and Wizardry as a haven for gothic vampires who hate preps, worship Satan, have sex, smoke cigarettes, drink blood, and travel back in time to stop Voldemort by sabotaging his gothic emo boyband.

“My Immortal” was published in 2006 when Harry Potter was at the height of it's popularity, and the internet was still the wild west. From that, this 44 chapter odyssey was born. It has since spawned YouTube live action videos, dramatic readings, and countless internet documentaries. It is widely regarded as the worst fan-fiction every written and, simultaneously, a masterpiece.

In this magnificent cluster-eff of a tale, our main character Ebony is in Slytherin House at Hogwarts and falls in love with Draco who is a buff, hot, Gothic guy who wears eye-liner and cries all the time.

Tension arises when Ebony and Draco go to a Good Charlotte concert in Hogsmeade, where they stop by the Forbidden Woods to “do it” and Ebony discovers Draco has a tattoo of Vampire's name. Thinking Draco is cheating on her, Ebony storms into Professor Snape's potions class the next day to call Vampire a mother-effer.

Before you know it, things only escalate as Voldemort returns, and gives Ebony an ultimatum: she kills Vampire Potter with a handgun Voldemort has given her...or Draco dies.

Then BAM, before you know it there's time travel, boy bands, sex scenes, and so many spelling and grammatical errors you would think you were on the Blackwell Community Talk Page.

“My Immortal”, obviously based on the song of the same name from Evanescence, is looked back on with nostalgia for adolescent fandom culture that was born from the perfect storm of Hot Topic, counter culture, Harry Potter, edgy YA fantasy, and a budding sense of the internet's independence coming together.

It also, interestingly enough, is the subject of heavy debate. Is it genuine, or is it all just an elaborate satire where the author herself is a character in the narrative? The actual authorship and background is debated to this day, and we may never actually TRULY know the real story, which keeps “My Immortal” truly timeless.

My Immortal is fascinating in the same way the film “The Room” is and, as such, has developed a cult following. I highly advise everyone to read it for themselves (it can be found just about anywhere online) or watch the various videos about it on YouTube. The Internet Historian did a condensed reading of the saga, and various fan-films have been produced.

For anyone that lived in the time of the early-2000's this will be like PTSD. For those that didn't, you're welcome for this bizarre and terrifying glimpse into a brave new world that is unlike anything that came before or will ever come again.