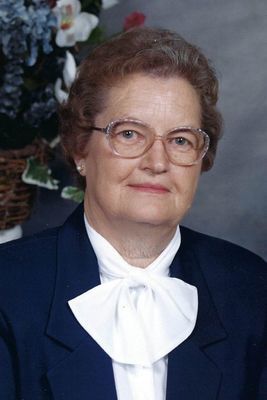 Mary Ellen Barrett of Blackwell, Oklahoma, went to be with her Lord on Thursday morning, September 10, 2020, at her home at the age of 85 years.

Mary Ellen Barrett was born on July 4, 1935, near Peckham, Oklahoma, to Arthur Henry and Rosa (Klein) Lambring. She began her education in the Peckham School and Lost Creek School before transferring into Blackwell Public Schools graduating with the Class of 1953. She worked at S. H. Kress, Oklahoma Tire and Supply and Braums Ice Cream Store in Blackwell. She later began a thirty year career as a bookkeeper for Blackwell Equipment, now P. & K. John Deere, retiring in 1999. She married Loren Barrett on November 19, 1979, in Wellington, Kansas, and they settled in Blackwell. She was an active member in the St. John’s Lutheran Church.

She was preceded in death by her husband; parents; two brothers, Harold and Raymond Lambring; and a step-son, Butch Barrett.

Services are scheduled for 10:00 a.m. on Monday, September 14 in the St. John’s Lutheran Church with Rev. Mark Mozeik officiating. Burial will follow in the Blackwell Cemetery.

A memorial has been established in her honor with St. John’s Lutheran Church and Hospice of North Central Oklahoma, sent in c/o Roberts and Son Funeral Home, 120 W. Padon, Blackwell, Oklahoma 74631.