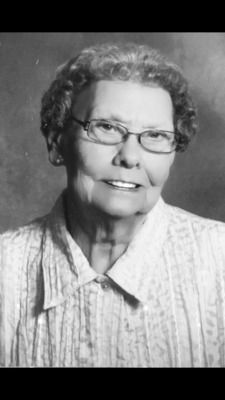 ?Stella M. Holland 94, of Blackwell, OK passed away peacefully on September 8, 2020. Born in Newkirk, she was the daughter of the late Peter and Clara Sheik.

Stella started farm work in Newkirk with a mule and plow, graduated from St. Mary’s High School in Ponca City, and worked at Conoco until after World War II was over.

She married Loyal Holland of Blackwell in 1947 and they farmed Southeast of Braman on land claimed by his father in the 1894 Cherokee Strip Land Run.

Stella believed in hard work and instilled this ethic to her children. She loved flowers, gardening, sewing, and volunteered many years at the hospital, Meals On Wheels, and museum. She played pitch with the Braman Card Club and won several awards in Blackwell league bowling.

Stella was a woman who valued family and her faith above all else. She was a long time parishioner at Saint Joseph’s Catholic church and member of the Altar Society.

In addition to her parents and husband, she was predeceased by her daughter, Sue Ann Barnett, and brothers, Joe Sheik and Art Sheik. Left to cherish her memory are two daughters, Janice Avallone (Joe), Cheryl Martin (John), and one son, Daryl Holland (Sharon); 11 grandchildren and 18 great grandchildren.

A graveside funeral will be held privately. In lieu of flowers, donations may be made to Saint Joseph‘s Catholic Church in Blackwell, or Juvenile Diabetes (JDRF) in memory of her daughter, Sue.

The family would like to thank her compassionate caregivers, Brookdale at Edmond, Centennial Hospice, Mary, and Catherine.