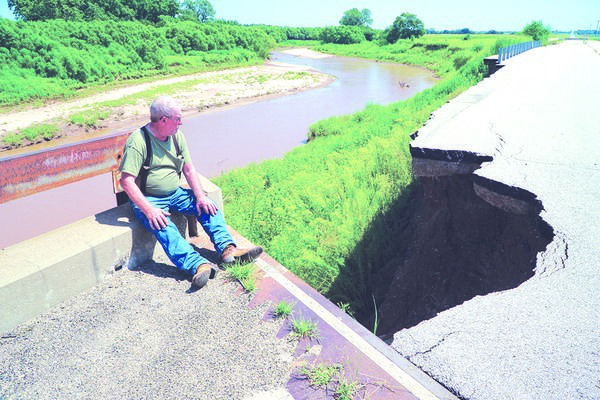 Editor’s Note: This story is the first part of a two-part series about the Hubbard Road bridge construction project. See next week’s edition of The Journal-Tribune for the second story.

Getting to Ponca City used to be easy for Don Godbehere.

At the end of his driveway, he would turn east onto Hubbard Road, one of Kay County’s busiest thoroughfares. He would use two bridges to cross over the Chikaskia River, which is fewer than 300 feet from his home. From there, he had a nine-mile drive to Ponca City.

The trip has gotten longer since portions of the bridges were damaged in May 2019.

More than a year and a half after a series of May floods washed away parts of the bridge system, county officials have received a $10.9 million grant from the Federal Highway Administration to build a new bridge across the Chikaskia River on Hubbard Road, Kay County District One Commissioner Jack Godberson said Friday. However, that bridge won’t be opened for four or five years while several studies – including an environmental study – are conducted.

In the meantime, landowners say they’re worried that nearby cropland could continue to erode during flooding.

Hubbard Road is the shortest and most direct route between Blackwell and Ponca City, the county’s two largest towns. Godberson said an average of 2,200 cars per day traveled the road when it was open.

Using Hubbard Road, the distance between the two cities is 14 miles. From the southern edge of Blackwell, drivers take US Highway 177 south for two miles before they connect with Hubbard Road. They turn east onto Hubbard Road and drive 12 miles to the northern edge of Ponca City.

County officials closed Hubbard Road to through traffic after the May 2019 flood damaged the bridge system, which includes the main bridge over the river and an overflow bridge built in 2015 to alleviate flooding in the area.

The system is located near one of the river’s oxbows, a place where the river curves and is beginning to cut a new channel through nearby land. The area floods during heavy rains, and it poses challenges to engineers as they build bridges there.

Floodwaters damaged parts of the overflow bridge after it was built in 2015, forcing the contractor on the project to make repairs. The flooding in May 2019 washed away even larger portions of the bridge, so county officials closed it. The contractor who built the bridge has gone out of business, Godberson said.

When engineers designed the overflow bridge, they cut the amount of space available for water to flow, Godbehere, the landowner, said. By narrowing the channel of the water, engineers increased the water’s velocity, giving it additional power to wash away soil and rock.

Godbehere’s family has lived near the river for more than 60 years, he said. Over time, he’s watched how the flow of the river has changed.

Godbehere said he isn’t the only person whose land has been damaged by flooding. Farmers miles downstream have lost soil, too.

To prevent further erosion, the riverbanks near the bridge and oxbow need to be shored up with additional rock once the new bridge is built, Godbehere said. Rock used to shore up riverbanks is called “rip-rap.”

While the federal grant will pay for some rip-rap, it won’t pay for all of it.

Donnie Head is the district manager for Circuit Engineering Division No. 8, a group that helps county governments plan infrastructure projects. He said the grant will pay for rip-rap to be applied around the bridge and roadway, though the grant won’t pay for rock around other parts of the riverbank.

“It’s going to be expensive to rip-rap that and put in some of these jetties and try to control water as it comes around that oxbow,” Godberson, the county commissioner, said.

Bridge construction will take less than a year to complete, officials say. Preparing for the project takes the most time.

County officials recently voted to hire Oklahoma City-based engineering firm EST, Inc. to design the new bridge, which will be an estimated 500 feet long and will replace the original bridge over the river. Bridge contractors will try to salvage parts of the 2015 overflow bridge that weren’t damaged, Head said.

The Oklahoma Department of Transportation will oversee the project.

In order to build a new bridge, state transportation officials have to conduct an environmental study that lasts anywhere from a year to 18 months to determine how construction could impact wildlife in the area, Head said.

“The engineer has been selected, so the next step is to get the engineer contract, and that’ll probably take four to six months, give or take a little bit,” Head said. “It’s got to go through ODOT, and then I think it’s got to be approved by the Federal Highway [Administration] because it’s federal highway money paying for it.

“Once that’s done, then they can turn into environmental studying. With the environmental study being on the Chikaskia River, that’s regulated by the Corps of Engineers. So that study will probably be a year to 18 months timeframe that it’ll take.”

Head said ODOT has to conduct the environmental study because the project is funded with federal money. Officials can’t reuse an environmental study conducted for the 2015 bridge project because it is now out-of-date – and because the 2015 project was funded through the state’s County Improvements for Roads and Bridges fund, not through the Federal Highway Administration.

“Most of the time, those studies are good for three years, and it was probably done two years before that project was built,” he said. “So it would be about seven years old. That was CIRB money, and this is federal highway funds, so the feds require the same type of study.”

Other studies analyzing the river’s flow will also be conducted.

Once the studies are completed, county officials have to allow bridge construction contractors to bid on the project. After a contractor is hired, construction of the bridge should take around nine months, Head said.

“By the time you get the ‘OK’ to get a project started, it’s about four to five years to get it to that point on just about any given project,” he said.

“It’s just a lot of red tape,” he said. “It just takes time to get something done.”

Until the land is shored up and the new bridge is built, landowners like Godbehere say they’re left to watch soil be carried away by floodwaters.

“Just get it fixed,” he said. “It’s a nightmare to me. Every time the river comes up, I’m wondering how much more is going to be lost to the river and guys on downstream.”