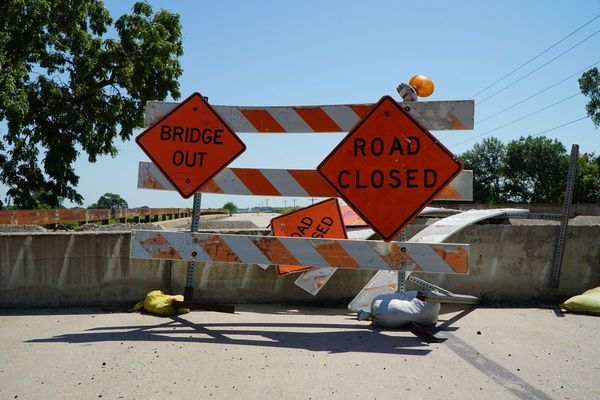 Editor’s Note: This story is the second part of a two-part series about the Hubbard Road bridge construction project. The first story was published in the Sept. 16 edition of The Journal-Tribune.

“The county has failed to maintain the roads that are the bypass,” he said. “They don’t mark their culvert pipes and none of that other stuff. I’m surprised we haven’t had a death out here on the dirt roads.”

More than a year and a half after a series of May floods washed away parts of the Hubbard Road bridge system over the Chikaskia River, county officials have received a $10.9 million grant from the Federal Highway Administration to build a new bridge across the river, Kay County District One Commissioner Jack Godberson said. However, that bridge won’t be opened for four or five years while several studies – including an environmental study – are conducted.

With Hubbard Road closed, drivers sometimes choose to divert down dirt roads in the area. Local residents and farmers say they have to contend with traffic safety concerns, and they also question why repairs to the Hubbard Road bridge system will take years to complete.

The bridge system on Hubbard Road, one of the busiest roads in the county, has been closed since floodwaters from the Chikaskia River damaged portions of the bridges in May 2019. Some drivers who aren’t familiar with the area aren’t aware that the road is closed, local residents say.

After the bridge system washed out, county officials posted “Road Closed” signs several miles east and west of the bridge near major intersections where drivers connect with Hubbard Road. They also placed concrete blocks on the bridge’s deck to prevent cars from crossing it.

Some drivers “can’t read,” said Don Godbehere, who lives fewer than 300 feet away from the bridge. Those drivers try to turn around in his driveway once they reach the closed bridge, he said.

Some vehicles, though, can’t turn around.

“We get semis down here,” he said. “They can’t turn around in the driveway. They’ll back into the driveway over at the corner of the field here. … You can get anywhere from one or two to six or eight vehicles down here a day, anything from cars and pickups with trailers to semis.

“You don’t know what they’re down here for, so you’ve got to get up and check things out.”

Urban, who farms land near the bridges, said the bridge’s closure poses a threat to farmers in the area who use rural roads to transport their farm equipment.

Since the bridge has been closed, traffic has increased on dirt roads farmers use. So has the likelihood of accidents, he said.

Urban said culverts and bridges along the dirt roads aren’t properly marked with reflective safety signs. Until Hubbard Road is reopened, Urban hopes officials will improve roads drivers use to bypass the bridge system, he said.

“All of that traffic is on the dirt roads,” he said. “I’ve had trailer [tires] explode on me because they hit little culvert bridges because they’re doing 50 miles per hour and decide they’re going to drive 50 miles per hour in the ditch. I’ve had cars pass me when I’m running a sprayer down the road – I didn’t know they were even behind me – and the next thing you know, you look at your left-hand side, and they’re down in the ditch going around you.

“Put the cars back on the blacktop. Keep the farm equipment on the dirt roads.”

In 2019, county officials talked about temporarily repairing the bridge system. They declined to make those repairs, citing the need for additional funding in the future.

Godberson, the county commissioner, said the county could have temporarily repaired the bridge for $2 million; making temporary repairs would have been a waste of money, he said.

“I felt like $2 million dollars was just a drop in the bucket of what it really needed, you know,” he said. “And another flood, and that $2 million would have just went on down the stream, and we wouldn’t have fixed nothing as a permanent fix.”

County officials recently voted to hire Oklahoma City-based engineering firm EST, Inc. to design a new river bridge, which will be an estimated 500 feet long and will replace the original bridge over the river. Bridge contractors will try to salvage parts of an existing overflow bridge that weren’t damaged.

Before beginning construction, the Oklahoma Department of Transportation must conduct an environmental study of the construction site to determine what impact construction would have on wildlife in the area. The study could take up to 18 months to complete, said Donnie Head, the district manager for Circuit Engineering Division No. 8, a group that helps county governments plan infrastructure projects.

Other studies analyzing the river’s flow will also be conducted.

Once the studies are completed, county officials have to allow bridge construction contractors to bid on the project. After a contractor is hired, construction of the bridge should take around nine months, Head said.

“By the time you get the ‘OK’ to get a project started, it’s about four to five years to get it to that point on just about any given project,” he said.

Urban, however, feels that county officials should have already completed the studies needed to prepare for construction.