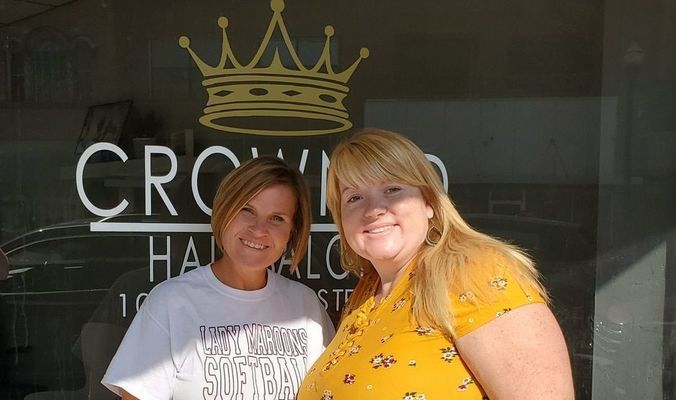 Blackwell locals might have noticed a new shop that has opened with a golden crown in the window at 109 S. Main St.: Crowned Hair Salon.

The salon, opened by Tia Santos and Heidi Ashford in early 2020, was affected by the coronavirus pandemic that swept the globe in March, forcing the pair to lock their doors and shut off their lights until the United States began to reopen for business.

Now, with business slowly coming back, Santos and Ashford say they are excited to be a part of Blackwell's Main Street.

The two have operated out of the Shaggy Chic Hair Salon, among other locations, and have found themselves to be staples of Blackwell's cosmetic conversation for more than 20 years.

“We moved into this building in December,” Ashford said. “Things were going really great. Then the pandemic hit.”

Ashford has been a hair stylist since 1993. She knew when she was a teenager that she wanted to be one, she said.

“My friends would come over before prom or coronation and have me fix their hair for them,” Ashford said. “I always loved to do it. I became the ‘hair' person, and I knew it was what I wanted to do.”

Santos also knew at a young age that cosmetology was her passion.

“I had an awful haircut as a girl,” Santos said with a laugh. “I think I'm doing this to make sure no one else feels that way.”

Santos taught in the cosmetology program at Pioneer Technology Center in Ponca City for a year after she herself graduated from the program.

“I think what I love most about being on Main Street is the people,” Santos said. “Our clients and neighbors have always been the most important part of the business.”