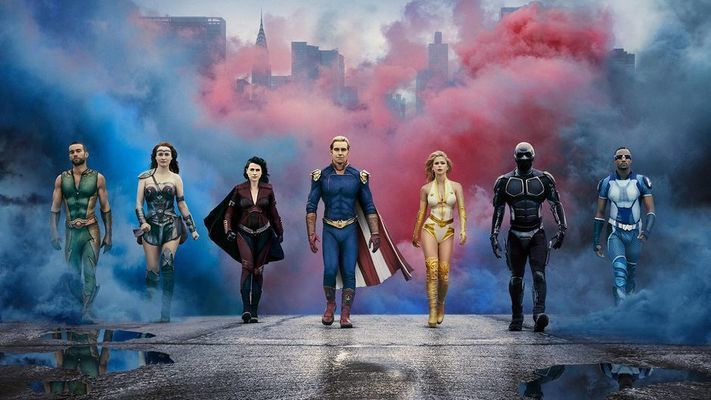 “Open your eyes...I like to see the light go out.”

Amazon Prime's surprise hit series THE BOYS has been ramping up the action in it's sophomore season so far, putting our heroes and villains on a collision course that will no-doubt lead to a radical Season 3...and if you aren't watching, you're missing out on one of the best TV series available.

The series follows Hughie Campbell (Jack Quaid) who, after his girlfriend is obliterated by the speedster known as A-Train, gets involved with a government sanctioned vigilante group dubbed “The Boys”, who keep an eye on the superheroes...and these supes aren't as wholesome as they appear.

When THE BOYS premiered last year on Amazon Prime, it was a more coherent interpretation of Garth Ennis' ultra violent and beyond edgy comic series of the same name. As such, the series presented itself with a first season that was gory and maniacal with a good blend of the irreverent-bordering-on-juvenile humor as it's comic book namesake and some genuine emotional complexity that the source material seemed to lack.

Moving into Season 2- now being released in weekly installments- the series has matured in a way that is both shocking and well-deserved. While THE BOYS still prides itself on humor, it doesn't seem to prop itself up on the more juvenile aspects of the series.

Season 1 opened with a “super hero sex club” showing a shrinking man diving into a woman's private parts and a stretchy man using his body morphing abilities in a less-than-kid-friendly way, the show still balanced that with the grit of the iconic airplane terrorist scene, Starlight's crisis of faith, Hughie's survivor's guilt, and more.

Season 2 amps up the latter and backs off the former, delving into these characters' psyches in a major way. The action has more grit and our heroes have more grime, and the direction has elevated from “streaming TV show” to “high end dramatic production”.

THE BOYS is nearly carried entirely on the charismatic (and terrifying) performance of Antony Starr as Homelander. Audiences may recognize Starr from Cinemax's short-lived but highly-praised pulpy thriller BANSHEE. Starr always seems one wrong word away from completely snapping, and the series has done a marvelous job at taking the “evil Superman” concept and turning it from a juvenile power fantasy (see 2018's BRIGHTBURN) into an engaging character study on nature vs nurture and the psychology of a man who not only thinks but KNOWS he's better than everyone on the planet.

Karl Urban also stars as Billy Butcher, the defacto leader of The Boys, and while he swears and slurs his way through every profanity in the book in his thick Australian accent, his moments of humanity are compelling to watch and absorb.

The super hero drama is a fantastic watch, and has been renewed for a third season as well as an Animal House/Hunger Games inspired college-set spinoff. Season 1 is available to stream in it's entirety on Amazon Prime with Season 2 nearly over. New episodes are released every Friday.

Politics: The Worst Time of the Year