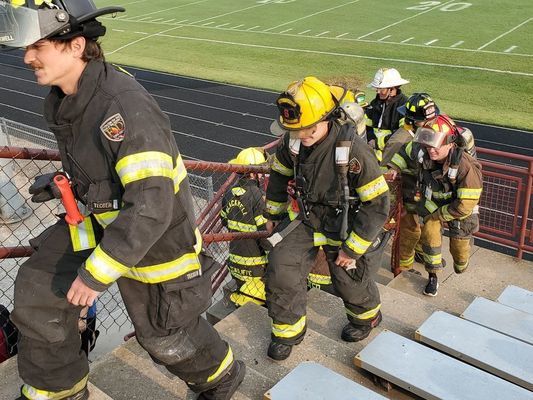 Members of the Blackwell Fire Department participated in the Memorial Stair Climb on Sept. 17 to honor the 343 firefighters who died in the Sept. 11, 2001 terrorist attacks on New York City's Twin Towers.

They began the climb in the bleachers at the Blackwell High School football field at 9:03 a.m., the moment at which the second tower of the World Trade Center was hit during the 2001 attacks.

Fire Chief Cory Hanebrink and 11 others completed the climb just before 11 a.m. Hanebrink was joined by Immanuel Baptist Church Pastor Matt Smith, a chaplain for the fire department, and representatives from the Tonkawa and Braman fire departments.

Each participant pays tribute to a New York City firefighter by climbing or walking the equivalent of the 110 stories of the World Trade Center. At the conclusion of the walk, the firefighter rings a bell and recites the name and information of a firefighter.

In the past, the climb has been set in Oklahoma City, but because of the coronavirus pandemic, the event was hosted virtually this year.

All proceeds from the event benefit the Oklahoma City National Memorial, the National Fallen Firefighters Foundation, and the New York City Fire Department.

Traci Hanebrink, Blackwell’s city clerk and the wife of Cory Hanebrink, said: “I saw this group encourage and lift each other up while finishing this. If one slowed, the others lifted them with words and back pats to let them know they could finish this. … It was humbling.”